As a Secret Buddhists Party, Mandang(卍黨) was the Anti-Japanese Independence Movement Organization during the Japanese Colonial Rule. Founded on May in 1930, Mandang was in the vanguard of the Nationalistic Buddhism. Anti-Japanize minded young men followed Manhae(卍海) Han Yong-Woon(韓龍雲), had National Buddhist-oriented activities with banners of the separation in politics and religion, the establishment of religion and politics, and the popularization of Buddhism.
When Mandang was its Internal Trouble in 1932 and was dissolved by itself under the break of Buddhist Sect. Although externals of Mandang was done away with, several members of the association established a strongpoint in DaSoISa(多率寺), cultivated the developmental sentiments against Japan as well.
As Choi Beom-Sul(崔凡述) was monk from DaSolSa in 1919, he led The March First Movement at Haein Temple(海印寺). Thenceforth, Choi Beom-Sul went to Japan in order to study Buddhism, and he continued to lead national movements against Japan in the country proper. In 1933, Choi Beom-Sul returned home, staffed the body of Mandang, and obtained the central position in national movement of Buddhist circle. Although Choi Beom-Sul took the leading of mandang's dissolution, he recruited the members of Mandang in DaSolSa and maintained the racial movements. Therefore, DaSolSa was one of the strong base in national and racial movement congregated patriot, including the members of Mandang, Han Yong-Woon, and so on. Choi Beom-Sul made use of DaSolSa, gave an impetus to both the national consciousness and activities of national education, attempted the publication of Shin Chae- Ho' s complete works. After all, his activities was placed under strict surveillance of Japanese imperialism. Choi Beom-Sul was placed under arrest owing to both the destructive event of a stone monument of great Buddhist Samyeong and the disclosure of Mandang. This case proves that he played the primary role in the latter half of Mandang's activities. In other words, I could not think that Choi Beom-Sul' s national movement separates from Mandang's activities. In the Future, It seems necessarily that profound study is need of Mandang's character and Choi Beorn-Sul's national movement. 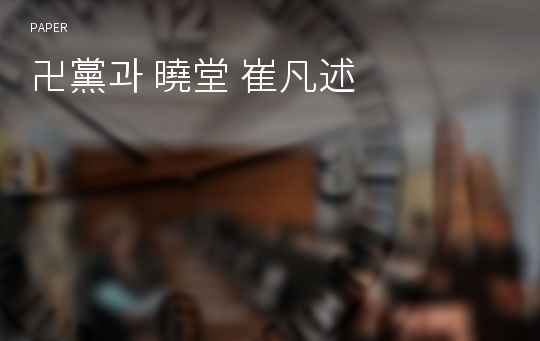