Nadya Suleman Case "Octomom", Excessive Implantation Of Embryos
March 23, 2013
Nadya Denise Doud-Suleman, born Natalie Denise Suleman, became known as “Octomom” via media sensationalism after giving birth to octuplets in January 2009. The successful birth of her octuplets are only the second full set of octuplets to be born alive in the United States. The circumstances surrounding her personal intentions, the in vetro fertilization, and public outcry over utilization of public assistance for support, have led to tremendous controversy.
Regarding her intentions, she has been under scrutiny for her ability to tell the truth so much of what she says is considered unreliable. She has, however admitted to using fertilization as a means to keep her marriage to then husband, Marco Gutierrez. Mr. 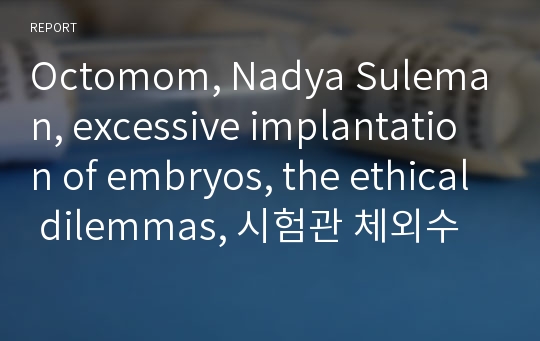