Reading In the Seven Woods as a Process of Meditation

Yeats published a total of four books of In the Seven Woods over 19 year period starting from 1903 through 1922. A comparison of these four books demonstrates how constantly and diligently he repositioned the order of poems, not to mention correcting lines and changing the titles of some poems. It was 1908 when the order of poems was finally fixed. Yeats's habitual rearrangement of his poems suggests that the poet was still struggling to reshape his intention. The fixation of order of poems in the 1908 volume of In the Seven Woods then implies that Yeats finally found himself satisfied with the message he tried to orchestrate through the volume. If so, what is an organizational principle shaping the final version of In the Seven Woods? And what message is Yeats going to send through the book of poems? The purpose of this paper is to answer these to
questions. Here my argument is that what Yeats finally chose for the skeleton of the 1908 and 1922 volume was a meditative structure. That is, the final order of poems has been evolved over the years in such a way as to reflect a meditative structure. In other words, In the Seven Woods, as a meditative sequence, consists of three stages of a composition of place, analysis and colloquy, which resemble the process in a meditative poem. Hence, his poetic message for the volume is also concerned with the purpose of meditation--specifically the Yeatsian concept of
meditation--that is, transcending human limitations by dissolving antinomies. There are two axes in In the Seven Woods: one--vertical--axis is made by an individual poem; the other--horizontal--axis is built by an arrangement of poems which provides another poetic statement. Here we have an individual poem which, when viewed separately, mainly deals with his emotional turmoil and deep psychic unrest due to his troubled love experiences with Maud Gonne. Here we also have a whole group of poems which are carefully framed to elevate his personal bitterness and anxiety to the collective problems of human beings due to their inability to
deal with antinomian principles. Through In the Seven Woods, the main character, or Yeats, sets out a meditative journey, a progressive movement toward a state beyond time or an aconceptual state where the meditator finds an answer for his quest for oneness. In the end, however, Yeats shows his strong skepticism about the possibility of achieving oneness. 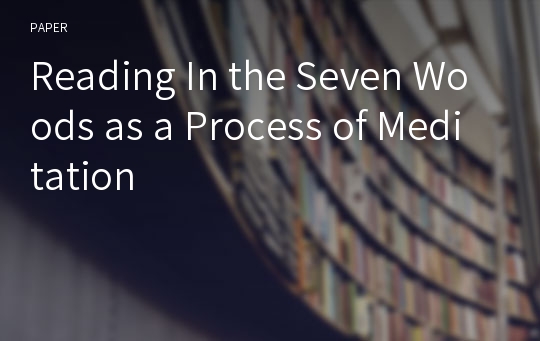