The aim of this artic1e is to introduce the contour of the history of the EATWOT (Ecumenical Association ofThird World Theologians) from 1976 to 1992 and to point out its significance and tasks from the mission perspective. The international conferences of the EATWOT deal with three issues: analysis of reality of the third world, missionary tasks of church, and reformulation of the third world theology. Characteristics of the third world are poverty and oppression. However these issues cannot be reduced to socio-economic matters. The rea1ity of the third world cannot be understood fully until third world theologians are able to account for the cultural is sues Missionary tasks of church include liberating mini stry, social responsibility for local community, suggestion for an a1ternative value system to capitalism, and recovery of Christian spirituality overcoming dichotomy between faith and life, prayer and action, commitment and every day life. Methodology of third world theology is the commitment to liberation and contemplation. Its authenticity depends upon to what extent it relates to rea1ity. The significance of the EATWOT from the mission perspective is, first of all, in that its theological center shifted from history to creation. Secondly, its understanding of the third world was enlarged by adding the aboriginal, the Indians of Latin America, and even gays and lesbians to the people of Asia, Africa and Latin America. Thirdly, it changed its attitude toward women and ferninist theology through which doing theology itself can be changed. Fourthly, not only socioeconornic analysis but also religio-cultural analysis are necessary for understanding the reality. Fifthly, as time passed, it reahzed the significance of spirituality. Important resources of spirituality could come from other religions, women, and the aboriginal. Sixthly, in relation to methodology of doing theology, the committment to struggle for ju stice and liberation was complemented by contemplation. Lastly, the subject of doing theology is not academic theologians but the faith community. One of important tasks of the EATWOT is how to harmonize the socio-econornic approach and religio-cultural one. In principle, every Christian is a theologian. However, without training the faith community and transforrning it into a hermeneutic community, this principle becomes meaningless. Even though the EATWOT declared “ the irruption of the third world", this irruption failed to bear fruits in the world. The changes in the times such as the collapse of the Eastern Socialist countries, the end of the ‘Cold War’ , the neoliberal global capitalism, and globalization resulted in ‘the world without a1ternatives' or ‘the end of history ’ . One of urgent tasks of third world theology is to suggest the alternative world through integrating personal, social, national, and global issues, and being solidarity with various kinds of NGOs at the local, national, regional and globallevel for the sake of globallife community. 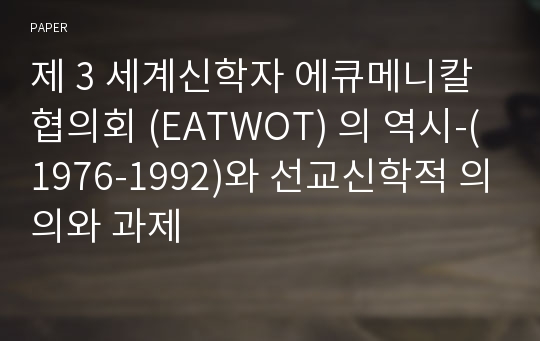