The Irish Peasant Drama and Violence : Mayne's The Troth and Red Turf

In Irish peasant dramas, the political movement for the emancipation of the farmers tended to idealize the rural world, which was made a symbol of Ireland and the new nation. In many of these plays Rutherford Mayne showed his interest in rural Ireland. His concern for agrarian matters was not only an intellectual or artistic one. He articulated his professional experiences with the inhabitants of rural Ireland and the redistribution of the land in his plays.
The Troth is an historical play. It tries to evoke the mood of need and misery prevailing in the years of Famine. Several allusions give its setting a definite place in Irish history. The murder just seems to be a passionate act of revenge, disconnected from any effective political movement. The violence in Red Turf springs from a different source: the main character is placed in such a humiliating situation that he loses his patience at the climax of the conflict. In each of Rutherford Mayne’s plays the passionate reaction of the main character springs from circumstances which lie outside his own person and which he believes to be unable to cope with.
The different motivations of the violent deeds are reflected in the structures of the two dramas. In the exposition of Rutherford Mayne's plays a situation is lined out which is not dramatic itself: The farmers are about to submit to a menace beyond their power; the cruelty of the landlord in one play and the ruthlessness of acquisitive neighbor in the other. In both plays it is the figure of a neighbor who brings the latent conflict to the surface. Passion and violence create a feeling of suffering which borders on tragedy. 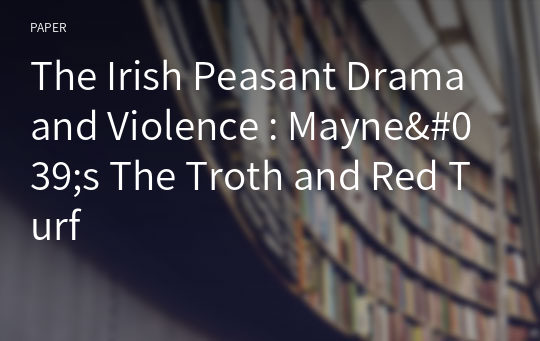