Georg Simmel in his attempt to interpret the modern world defined modern society as a monetary society because it is in the notion of money that the modern spirit finds its most perfect expression. Edith Wharton`s The House of Mirth represents upper class society at the turn of the century New York city in which money becomes the power to define what is good and right. With the advent of capitalism, the power of the marketplace becomes the controlling logic of society and the business ethic dominates all aspects of human life. The capitalists, who lack a moral consciousness and a sense of social responsibility, hold sway over socio-cultural power. Thorstein Veblen, in The Theory of Leisure Class, analyzes the new rich class and points to "conspicuous consumption" as one of the key characteristics of this emergent class. Under this male dominated version of capitalism, women become a commodity to be exchanged and traded, leaving marriage as the only avenue by which women from the upper class may be successful, as they are excluded from the area of production. Women are enjoined to showcase the wealth of their husbands by decorating themselves with expensive clothes and jewelry. In other words, women`s physical beauty can be exchanged for financial security as well as social status. Wharton`s The House of Mirth deals with capitalism and female subjects in the era of modernity. The novel exposes how capitalism not only makes women hostile to their own sex through their competitive relations, but also causes men to be exploited by women seeking financial gains. Lily Bart loses her social status as a member of the leisure class and is excluded from the society due to the fraudulent rumor. She realizes that fraudulence, vanity and contradictions not only objectify but devalue women`s integrity and nobility. In the course of her social descent, she finally realizes the central truth of existence by witnessing the life built by a man`s trust and a woman`s courage. In spite of Lily`s final death which dramatizes the tragedy inherent in the capitalist society, her resistance to the temptations of business ethics demonstrates the invincible nobility of human spirit and, by doing so, Lily saves herself from the vicious circle of trade and exchange in modern world. 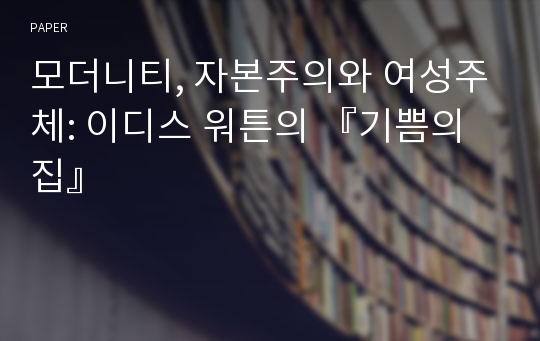