While exploring the historical, cultural, political contexts of the Victorian society, this paper pays a special attention to monster hunters in relation to monsters in Mary Shelley`s Frankenstein (1818) and Bram Stoker`s Dracula (1897). As the world`s first industrial nation, Britain in the 19th century was tremendously diverse and complex. The society underwent the agricultural and industrial revolutions resulting in a burgeoning middle class which triggered major changes to the social strata itself. Thus, the Victorian era was understood as a time of peace, prosperity, social, political and religious movements, great imperial expansion, and unprecedented demographic increase. Culturally, various artistic styles and literary schools flourished. The popularity of the Gothic revival architecture grew rapidly, and the novel continued to thrive through this period. Interestingly, the Gothic pervaded Victorian literature. Even though the definition of the Gothic novel as a mixed genre has long been debated, without a doubt, it is strongly associated with something uncanny. Shelley`s Frankenstein and Stoker`s Dracula based on the supernatural phenomena and the prevailing morbid atmosphere are representatives of the Victorian Gothic novel in which Gothicism is closely related to romanticism. In spite of the fact that the Gothic novel has been disregarded as "un-academic," indeed, the influence of these most well-known Gothic romances are still evident today in modern popular culture. In essence, the fascinating and horrifying novels full of violent images ask the religious, political, and cultural question, "what is a human being?" While Frankenstein`s creature and Count Dracula become the archetypes of gruesome monsters which evoke a sense of anxiety, fear, and dread, Bourgeois white monster hunters are admired for their gentlemanship, goodness, cultivation, and faithfulness. Meanwhile, Victorian women are objectified and terrified by horrible violence exerted by both the monsters and monster hunters. Eventually, this paper demonstrates that in these novels, the uncanny monsters and rational monster hunters, who embody the images of modernity and justify their violent work, are grotesquely ambivalent in terms of monstrosity, violence, morality, and humanity beyond the religious boundaries of good and evil. 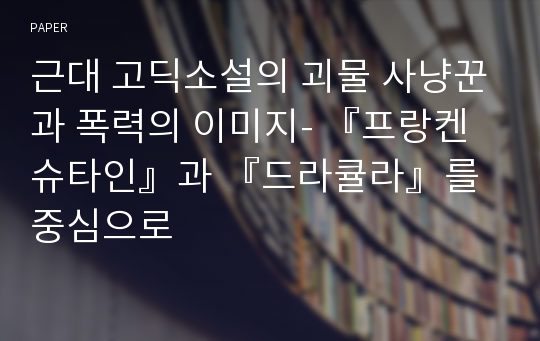