One of the criticisms of John Fowles (1926-2005) that considers him as an ecologist who has a deeper understanding of nature appeals to those bewildered by the rapidly changing natural environment. Fowles`s reputation as a great authority in metafiction and a existentialist writer is being rediscovered from a ecologist point of view. Through his understanding and interest in nature, he did not consider nature just surroundings or an aid for subjects or narrative techniques but made it meaningful new space and let it play provocative roles in his writing. He fulfilled his artistic fruits not only through describing nature as realistically as possible from scientific point of view but through getting his readers to see it unfamiliarly. He tried to arbitrate the relationship between nature and humans by narrating nature vaguely, mysteriously, and more realistically than any other photos from a double, scientific and artistic point of view. Nature in Fowles`s novels is not just a surrounding of each plot but a landscape which has culture, civilization and history. Fowles`s nature has had an effect on the characters in his novel, readers, and even himself, a writer. He has said that nature is obscure and its very vague aspect stimulates his interest more. Fowles has been a writer who considers life mysterious like nature and he found nature suitable for configurating the mystery of life. His novels have the effect of maximizing both existential subjects and material of nature by trying a variety of narrative techniques. Fowles has checked the possibility of coexistence between nature and humans through his novels. He has made an effort to recover a balance between science and art, reason and sensibility through his writings. In The Collector, he has served to impress upon how difficult coexistence between nature and humans is by expressing nature`s loss of life due to human`s arrogant scientific stance through Miranda`s death. The Magus has shown again that it is difficult to coexist with nature through Nicholas selfish but incomparable to Clegg in The Collector. In The French Lieutenant`s Woman, Fowles offers a clue for coexistence between nature and humans through Charles who is similar to Clegg as a pseudo scientist but has evolutionary potential for the growth of self or recognition of others. Humans have separated themselves from nature due to spectacular progress on science and excessive growth of reason. Humans have instinctively recognized the profound thought that human beings are different from nature, which has been evolved. However, we contemporary humans, who recognize that the harmony of the ecosystem is the foundation for preserving human species, can understand ways we can coexist with nature through listening to stories of writers such as Fowles. Now, the new recognition about nature through a proper reconciliation of science and art in Fowles`s texts will be a way to coexist with nature without alienating humans in nature from nature. 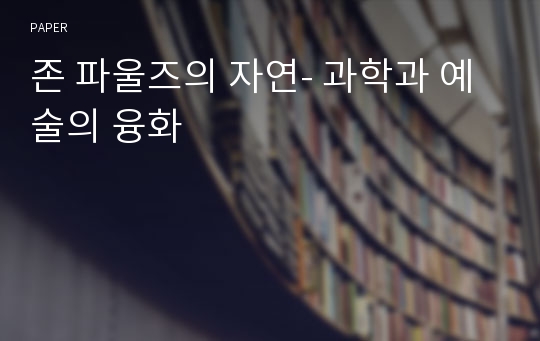