This paper examines the development and the activity of a group of the female audience, frequently referred to as "the Shakespeare Ladies Club" in the mid-eighteenth century England in terms of the Shakespeare revival and restoration. Many of theatrical records inclusive of theatre playbills published in the period spaning 1736 to 1738, advertising that Shakespeare plays are performed "At the Desire of several Ladies of Quality," clearly demonstrate that the Shakespeare Ladies club had considerable influence not just in putting more Shakespeare on the stage but on the type of play performed, on restoring neglected Shakespeare play to the theater, and on reinstating Shakespeare in the original. Therefore, it is plausible that their efforts on behalf of Shakespeare also paved the way for David Garrick`s championing later in the century. It is believed that among the members of the club were Elizabeth Boyd, Mary Cowper, and Susanna Ashely Cooper, the countess of Shaftesbury as the leading light. They did make a great effort to restore Shakespeare`s presence on the London stage, trying to increase the number of his original plays in the theatre and to erect a monument in memory of the author whom they regarded the spirit of Englishness. This study on women`s responses to and constructions of Shakespeare proves that they were instrumental in determining the way that Shakespeare was perceived in the long eighteenth century and beyond. 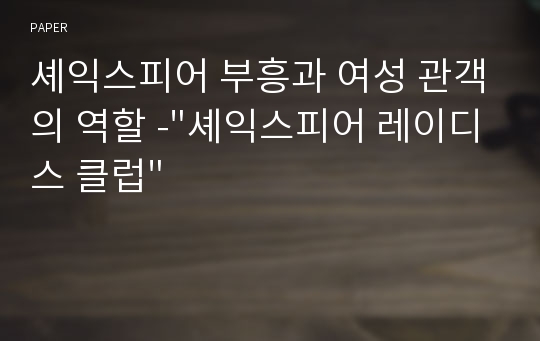