As the economic power is increasing in China, Chinese people have the national confidence. The popular songs, which describe the sense of superiority and self-esteem about Chinese culture, have been sung by Chinese idol singers and these songs have been loved. These facts show that Chinese people is surrounded in the more patriotic culture environment than other country`s people. Because the Socialism has lost the ideological reign power after Tian`anmen Square protests and introduction of Market Economy, the Chinese Community Party and government needed the new ideology and recognized importance of the traditional culture as the core constituent in the new reign ideology. Based on these cultural background, the 21th century ``Chinoiserie`` songs, which choose the subject matters from the classic texts, have the theme on ``Patriotism`` and ``Sinocentrism``, mix the western musical styles and the Chinese traditional musical styles and are distinctly different from the previous popular songs, have appeared. The ``Chinoiserie`` songs have some distinct characteristics. Firstly, their lyrics are very peculiar feature. That is, the overall atmosphere of lyrics is similar to the classic poem and historical persons or historical event is described in the lyrics. Secondly, ``Patriotism`` and ``Sinocentrism`` are greatly emphasized. Because of these facts, the Chinese government is favorable and Zhou Jie Lun`s songs have been on the college entrance exam. Some conservatives criticized that these songs treated the Chinese traditional culture and history for the sake of arousing the interest. However, it may be positively evaluated that many young people have the pride on the their country`s culture and have the interest to the traditional culture. The vogue of ``Chinoiserie`` songs is not the accident event. Although mass culture may be considered as the only entertainment, we can recognize that mass culture may greatly influence on the value and thought of the mass from the case of ``Chinoiserie`` songs. 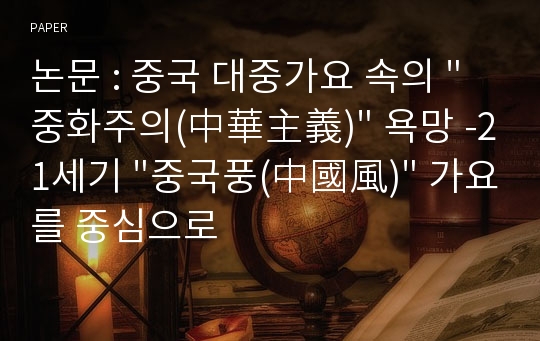