The Culture of Speculation and Vision in The House of Mirth

In The House of Mirth, recurrently emphasizing on the visual politics of her characters to express their social significance and identity, which are engaged with metaphors and images from the worlds of finance, Wharton provides a profound insight into how the visual representations of self, status and social relations are “redefined in,” or more strictly speaking, “merged into” the modern economic imagination. Illuminating the cultural privileging of vision, visual representation and visuality which became integral to determine the identity and the reality of Wharton`s characters, this paper examines the dynamics of their visual representations in relation to their speculative nature. Especially, elaborating how Lily`s own speculation (calculated performance, vision-making or display) solicits or discourages the investment of those who around her, and how Lily`s own conception of her “self” is actually determined by capitalists` investment value assessment, this paper demonstrates both the speculative nature of the visual representations and their precarious possibilities, that were actually embedded in the broader social, cultural and economic changes at the turn of the twentieth century. 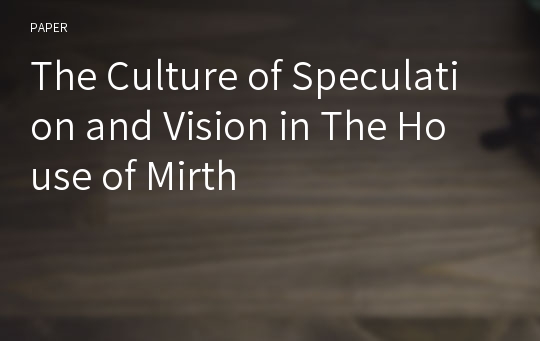