Purpose: Fitz-Hugh-Curtis syndrome (FHCS) is a perihepatitis associated with pelvic inflammatory disease. Due to difficulty in diagnosis of FHCS on initial evaluation, we developed a reliable scoring system for screening FHCS using clinical variables. Methods: We reviewed the registries of women of childbearing age who presented with upper abdominal pain in an urban emergency department from April 2008 to October 2010. Using multivariate analysis, along with 95% confidence interval (CI), we identified the statistically significant predictor variables that affected the FHCS. Using the results, we developed the scoring system for FHCS. Performances of each score were evaluated using the receiver operating characteristics (ROC) curve. Results: A total of 361 eligible women of childbearing age were enrolled in our study. Fifty patients were diagnosed as FHCS. The significant factors for FHCS were as follows: pain onset for more than two days, history of abortion, unmarried woman, coitus within four weeks, migrating pain, absence of gastrointestinal symptoms, absence of urinary symptoms, and elevation of C-reactive protein. We assigned a score of 1 or 2 to each variable using the beta-coefficients. The ROC areas of the scoring system were 0.920. Patients were categorized as low (score 0~4), intermediate (score 5~7), and high (score 8~10) risk groups; 75.0% of high, 18.3% of intermediate, and 1.0% of the low risk group were diagnosed as FHCS. Conclusion: We developed a novel scoring system for screening FHCS of women of child-bearing-age who had presented with upper abdominal pain. Use of this scoring system will allow for easier screening for FHCS in women of child-bearing age. 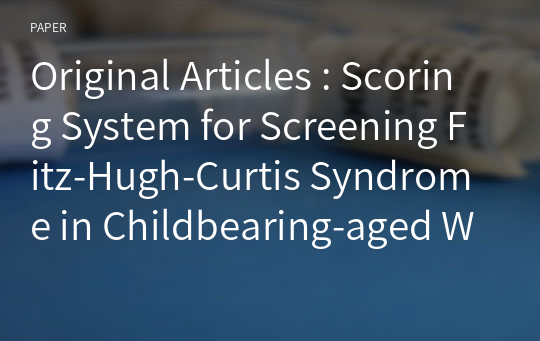