Chinese characters form the foundation of learning Chinese, and present the most difficulty to foreign learners. Chinese characters are not totally ideographic but a mixed system of ideographic plus phonetic signs. In reality, there is no purely ideographic writing system in the whole word. A Chinese character represents a morpheme of the language, which may have a traditional form or a simplified form, or various variant forms used through history and informal writing. It usually represents one syllable, but sometimes 2 such as 리 and촌 of foreign origin. Besides, related to character learning, there are also problems such as discrepancies between formal reading and colloquial reading, 1 character being differentiated as different morphemes so that more than one reading is allowed, and different standards in pronunciation across the Straits. Due to historical development, a character may represent different meanings, some of which are related and some not. So to familiarize with Chinese characters is definitely not an easy task even for the Chinese people. In Chinese primary language education, characters are the basic units to teach. Traditionally, Chinese dictionaries, are ordered by characters and words are ordered after their corresponding initial character in the character entries. In this digital and multimedia era, this kind of character-based fundamental education should be optimized. In this paper, “Dianhualiuxing” & “Chinese Characters 1000”, two related courseware systems produced for the Education Bureau of HKSAR will be introduced. It is hoped that the etymology and evolution of character form will be linked with the learning process through animation or so-called morphing, so that students can better grasp the formation principles and form evolution of characters. Then, on top of this, how to make use of the character knowledge base constructed in “Dianhualiuxing” to provide different learning paths for students to make character learning more focused and effective will be discussed, hoping that this will serve as a solid foundation to improve the learning of the Chinese language. 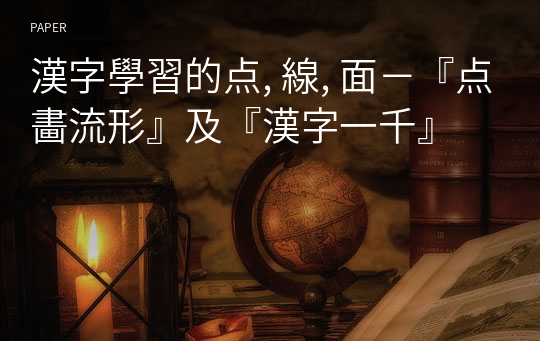