The Plays of O Tae-suk since 2000 differ from his works before. His theatre that had been full of terrible memories of Korean War, social anger, and personal traumas now begins to talk about forgiveness, reconciliation, life, and environment. In these days, various animals appears in his works such as Dancing with a fox, A centipede and an earthworm, DMZ my love, Galmury, Hi Bookchung Lion, The story of Arunggugi, including the reinterpretation of Romeo and Juliet and Tempest. by Shakespeare. It seems to be true that he became interested in ecology, life itself and may have became fed up with human-oriented society. However, the animals of O tae-suk`s theatre are neither fully self-conscious nor well arranged in terms of theatre aesthetics so far. All that he wanted with animals on stage might be nothing but to tell the story vividly with allegorical devices or to just ``play`` with non human beings giving himself up to his own theatrical temper and instinct. To offer his theatre a possible aesthetic dimension and mapping vision, this paper tries to examine the appearance of animals in his recent works with the view points of 1) representation of animals, 2) presentation of animals and 3) ``animal-becoming(devenir)`` of Deleuze. 1) Representations of animal are carried out through various symbolic devices and personification of animals. The acting of human actors tend to be imitative of animals while the behaviors and appearances of the personifies animals resemble those of human. Animals become symbols regarding the themes of the plays. Ethically dualistic divisions are found among symbolized animals. Often the divisional line are drawn between purity(nature)/ pollution (civilization). But more noticeable duality is formed between the good-for-human/bad-for-human which is more human-oriented and practical concept. So, the domestic productive animals like duck and goat, not the pets like cats or dogs are favoured in his work, and with them O`s real ecological chain could be accomplished. Animals in folktale that personify human wishes also appear often, 2) Since O is a born-to-be a strongly theatrical person and his theatre is beyond logic, the animal on his stage tend to break through representational illusion and the logical network of meaning. For instance, his languages describing animals are more to sound and ear than to meaning and brain. Songs and dances expressing animals enrich the grains and the texture of the performance. Certain unreality and the liveliness of animals stimulate the energy, rhythm and physicality of O`s theatre. 3) Are there any possibilities that the human actors be free from representing or presenting animals in O`s theatre? that animal cease to be ``others`` to the human? and that the human and animal get closer to each other and inter-transform in the field of existence, physicality, and flow of energies of O`s theatre? Deleuze`s ``becoming`` can be a approach to this question. In Dancing with a fox, an innocent girl from Yonbon, a korean district of China, not yet polluted by post-capitalism of South Korea is, physically identified with the imported foxes from Yonbon, an animal almost had been perished in Korean peninsula. In Galmury, The village elders mingled themselves physically and intensively with wild animals. In O`s reinterpretation of Romeo and Juliet, vitality and life force of the young lovers were emitted through those of the animals. In Tempest the deterritorialized island of Prospero was filled with various animals. It should be mentioned that there is an important difference between Deleuze and O Tae-suk in that O does not share the political attitude such as ``line of flighte`` or the anti-humanistuc notion like ``machine`` of Deleuze. However, It will be noteworthy that elements such as unstability of identities, the physical and transformative vision of the world, interest in a flow of energy, process-oriented attitude are what they have in common. 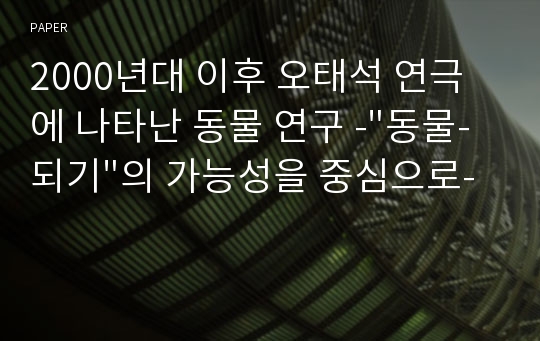