The Online Processing of Ambiguous Sentences with a Focus Particle only

This study investigates how English-speaking children (5-6 years old) interpret, in real time, scope ambiguous sentences with a preverbal only as in Charlie is only walking the dog. → Charlie is walking [only the dog] (NP Scope) → Charlie is [only walking the dog] (VP Scope). Prior research suggests adults favor NP scope while children prefer VP scope (Crain et al. 1994). An eye-movement-during-listening paradigm was employed in which participants heard a description of a picture and their eye movements were video-recorded. Also the task used a context-based methodology in which contextual information was provided to help children compute contrast information. The results show that like adults capable of accessing NP scope interpretation, children exhibit a NP scope interpretation. In contrast to previous reports of children`s failure to use contrast information (Paterson et al. 2003), the present study found that children employed contrast information and resolve focus ambiguity by assigning NP scope. This suggests that children, despite presumably less-developed pragmatic knowledge, have the ability to mentally compute a contrast set for sentences with only and access an NP scope interpretation in an adult-like way with the help of contexts. 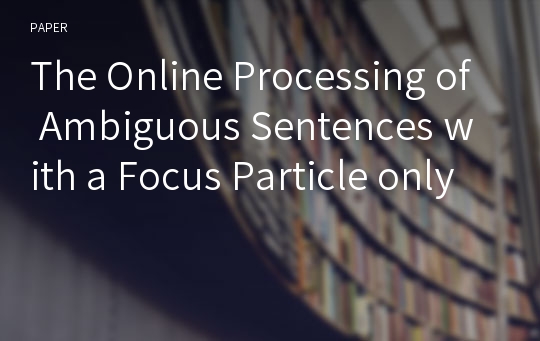