Examining the procedures of the Chinese poetry development in a bird-eye view, the Chunqiu era was the period where the political and societal roles of the poetry were reflected in a very unique form. The poetry in the Chunqiu era served not only its primary role of producing literary works, but also extended its function to a means of communication in the diplomatic interactions between the Chunqiu and its feudally-superior countries. Particularly, this role was performed in a so-called "Fushiyanzhi" method, in which long phrases extracted from Shijing were often used in intimating one`s intention. The related research and studies reveal that the method was used widely in that period. "Fushiyanzhi" was a system in which the long phrases were quoted from Shijing and used as a means of communication in conveying one`s personal intentions, as well as in delivering a diplomatic response. It was an essential means of communication for those pursuing a career success, and thus required them to gain a thorough knowledge in Shijing for an effective use of "Fushiyanzhi". Despite its prevalence over the Chunqiu era, the "Fushiyanzhi" method, often illustrated in Zuozhuan and Guoyu, has left no trace behind since then, which is still considered as one of the rarest cultural and literary phenomenon in the Chinese history. This article is structured to conduct a detailed analysis on the method of "Duanzhangquyi" by verifying various divergent views, which were previously discussed, on the mechanism of "Fushiyanzhi". In addition, the analysis will take a further step towards the socio-political roles of the poetry in the Chunqiu era, by examining the stages of the prosperity and decline of "Fushiyanzhi". First, "Fushi" had its own unique tone levels, which were very distinctive from the ones of "Songshi" and "Geshi". Current research and studies, however, lack the in-depth knowledge regarding this, and thus, more profound and detailed research needs to be conducted to interpret the concrete and detailed features of this tone. Moreover, the demand for "Fushiyanzhi" grew out of the ruling classes, who were attracted to its indirect and implicit ways of expression. The implicitness and subtleness of "Fushiyanzhi" were influenced by the method of "Duanzhangquyi", which were adapted not only to "Fushiyanzhi" itself, but also to the extent of "Yinshi", giving impacts on various writings until the Han dynasty. However, it is not to be overlooked that the prevalence of "Fushiyanzhi" was based on the ideological background of ``utilitarianism``, which sought to submit the usefulness of poetry and music to the society where the governance of the country was based on the rules of norms and taken-for-granted beliefs, rather than a law. This is consistent with the fact that the poems and songs in China have long been evaluated in terms of practicability aspect, rather than of its literature uniqueness, ever since the beginning of the Chu dynasty. Based on this ideological background and practicability, the focus on the traditional use of "Fushiyanzhi" in the royal rituals began to shift to the use of communication for the ruling classes at the beginning of the Chu era, and had served as that particular means over several hundred years. 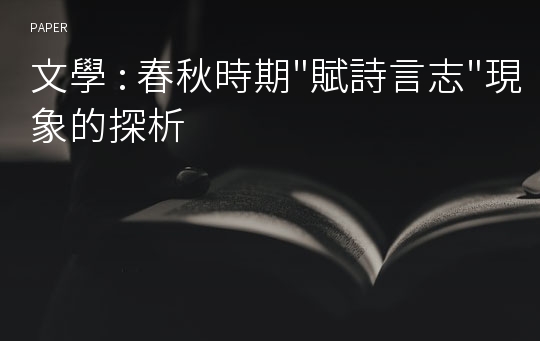