The literary critic Kim Hyeon has postulated that in all of the nihilism that characterized Korean literature (what he termed "undifferentiated nihilism") after the war and up until the late 1960s, only a couple of author`s works offered the possibility of what he called "salvation." Kim Sung Ok was one of these authors. Kim Hyeon goes on to characterize the nihilism found in the Korean literature of the period as lacking the potential to provide opportunities for individual growth and lamented the fact that such nihilism was characteristic of Korean literature and was different from the nihilism of Western literature. He did not expound on the nature of such Western nihilism, but it seems evident that he was referring to the affirmative nihilism proposed by Nietzsche. In fact, nihilism was a key element of much of the literature of the twentieth century and was an important element of modernism. One Western writer frequently associated with the idea of nihilism is Ernest Hemingway. In spite of Kim Hyeon`s assertions as to the lack of differentiation of Korean literary nihilism, some Korean writers were by the 1950s and 60s participating in this worldwide idiom, and in fact, Kim Sung Ok produced at least one story that has a very Hemingway-esque quality to it that begs a comparison of the two stories. This paper attempts two things: one is to clarify the natures of these contrasting forms of nihilism and, the second is, through a comparative reading of Kim Sung Ok`s Seoul, Winter 1964 and Hemingway`s short story A Clean, Well-Lighted Place, to discuss how nihilism operates in the two stories in the context of the notion of the possibility of "salvation." 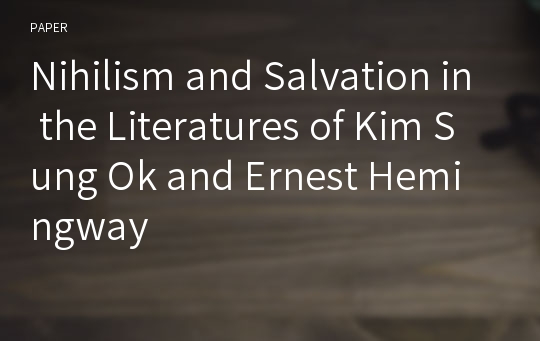