The ``Great Evasion`` chapters of Adventures of Huckleberry Finn where Twainian ``art of lying`` is wonderfully performed and thereby reminds readers of the analogical ending of the artistic wish-fulfillment of The Pioneers(1821) remain to this day a truly pivotal conundrum of Twain study; the critical re-evaluation of the later works of Mark Twain would not be fully accomplished unless we follow the fate of Huck Finn and Jim in the racial world. The brotherhood of Huck Finn and Jim which is naturally formed through the pursuit of their respective freedom compels readers of Twain to envision their future. longest and most promising unfinished novel, "Which Was It?" is surely the track on which we can make out the ``effect`` of humanistic lying so successfully deployed at the end of Adventures of Huckleberry Finn. The inverted relationship of Master and Slave that is realized in "Which Was It?" indicates the limit of ``the art of lying`` in the nadir of racial reality in the early 20th century America. The masquerade played by conscious-stricken George Harrison, a roughhewed grown-up image of Huck Finn and by Jasper, a monstrous grow-down picture of Jim reveals the pitfall of moral consciousness of Huck Finn and humanism of Jim in Post-Bellum South. So it can`t be denied that the viciously inverted dialectic of Master and Slave in "Which Was It?" is one of the crucial testimonies of the creative achievement of later Twain. But "Which Was It?" as an essential sequel to Adventures of Huckleberry Finn makes paradoxically all the more clear the nightmare of racism that Twain as a writer so persistently tried to wake off, to say nothing of the absence of a positive alternative to the dead-end of the American civilization. It necessarily leads us to the rigorous delimitation of later works of Twain. 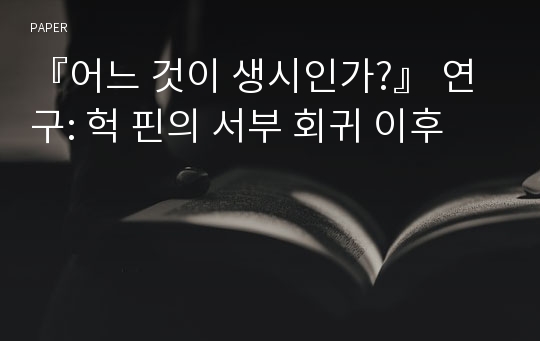