William Wordsworth and the Humankind/Nature Relation: An Ecocritical Introduction

William Wordsworth`s poetry has discursive spaces enough to reconsider his view of the relationship between human beings and nature as an ecological perspective resistant to the Enlightenment dualism. The poet`s major critics re-evaluate his thought of the relation from their own critical viewpoints such as humanism, deconstruction, and new historicism. They tend to assert that his poetry is dependent on the dichotomous opposition between consciousness and nature. They have barely paid attention to the possibility of the environmental discourse concealed in his concept of the relation. The poet transfigures the relation as communicative, which shows that each being is self-sufficient and interdependent. Wordsworth`s transfiguration is ecological because it proposes an ethical mode of action which sustains human beings and the natural world in a balance. (Chungnam National University) 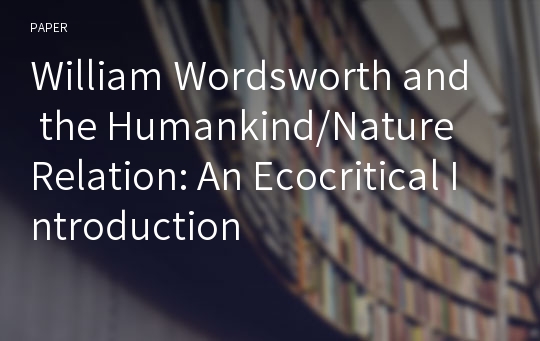