Ernest Hemingway shows his antiwar ideology along with human beings` strong will to overcome absurdity and existential nihility in the most of his novels. A Farewell to Arms is Hemingway`s semi-autobiographical novel based on the events occurred in the battle front between Italy and Austria during the First World War. The book, which was published in 1929, is narrated by a first-person account of American Frederic Henry who serves as an Lieutenant ("Tenente") in the ambulance corps of the Italian Army. Hemingway describes the tragic situation of the first great war in graphic detail to reveal human beings` absurd and existential situations. He shows a lot of real disastrous scenes wrought out of the impersonal and cruel war in which human beings are driven up to an extreme situation without safety and life. As he is sick of the meaningless and cruel war, the protagonist, Frederic Henry, ales to escape from the war front to have a separate peace and a happy new life with his lover, a British nurse, Catherine Barkley. In this book, Hemingway shows two literary levels such as a story concerning the doomed tragic romance between Henry and Catherine, and the impersonal and futile destruction wrought by the war against their romance. Therefore, Hemingway deftly contrasts their love with the cynicism of soldiers and the futility of war to reveal his antiwar thought and human beings` strong will to overcome the absurd situation. 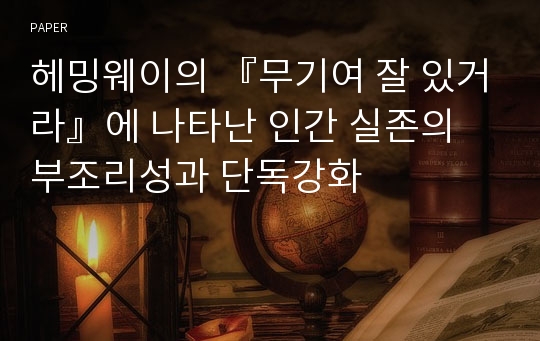