This article examined focusing on expressions of the our ancestors` perception regarding both wars of Imjin and Byeongja which had been represented in sijos. It analyzed the works and the writers related to both wars of Imjin and Byeongja and classified them into internal and external perception to examine the expressions of subjects. The above discussions are summarized as in the followings: First, regarding the works and the writers of sijo related to both wars of Imjin and Byeongja, there are 31 pieces related to Imjin War in 1592 and 84 pieces related to Byeongja War in 1636, which are 84 pieces in total. Regarding the writers, 74 pieces were written by 30 identified writers, while 10 pieces were written by unidentified writers, which are 27 pieces by 7 identified writers about Imjin War, while 47 pieces by 21 identified writers about Byeongja War. Regarding the group of writers, many works were written by various people who experienced the wars at that time including the royal family as well as literary persons, military persons, while the people in later generations are Kang Eung Hwan, Kim Seong Eung, Shin Yeo Cheol, Kim Mook Soo, Kim Soo Jang and so forth. Second, it examined expressions of the perception of those historical events in the aspects of internal and external, and found that the internal expressions of the perception were ``lamentation of their incapacity``, ``commemoration of patriotism``, ``pain of family separation and the longing``, while the external expressions of the perception were ``revenge and the will of fighting``, ``resentment of and reliance on toadyism``, ``fatalistic attitudes towards Heaven`s will`` and so forth. Lastly, as the literary meaning and functions of sijos with historical backgrounds, it considers that first, there are relatively more sijos contained historical awareness than other genres, second, it could confirm the variety in the group of writers, and third, it could get a sense of the variety in expressions of the subjects with historical perception. Like this, our ancestors showed their various expressions of perception about the both wars of Imjin and Byeongja and it considers that sijo is a genre which had performed its function faithfully. This article discussed only limiting to both wars of Imjin and Byeongja as external events but it believes that the aesthetic sense of sijo will be able to find out in much more objective and realistic aspects when discussions about internal events can be made in future. 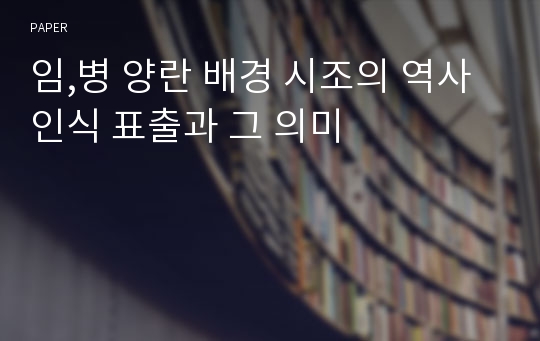