William Blake has been called a prophet-poet of the New Age in the late of 18th Century. But many of us have been somewhat bewildered by the illogical connection of time and place in his prophetic poems as well as the complexity of his mythic system. This thesis is to study on the paradoxical view of time and place in the process of salvation in Blake`s late prophetic poems, especially Milton and Jerusalem. The main character who symbolizes the paradoxical task of artist is a "prophet of Eternity," Los. For Blake, the redemptive time identified with Los is possible by his prophetic imagination, because he identifies ``Human Imagination`` with Jesus himself. For him, revelation is from eternity but happens in time. Likewise, the space of London, therefore, is not limited to the city of London. The spatio-temporal experience of London has spread out from the city of London, co-extensively with the ever- increasing spread of all nations, a spatial system of unequal and exploitive relations and exchanges gradually overspreading the 4 continents and 32 nations of his world. Blake`s project - and Los`s - is to construct the redemptive space of a new Jerusalem out of the nightmare of the present-day "mind-forg`d manacles" in the space of London. It is out the space of London that the city of art, Golgonooza, must be built. Blake`s conception of apocalyptic revolution and salvation involves the creation of another and better world, which has to be both spiritually and materially constructed out of the physicality and spatiality of London. Golgonooza, is not identified with a city of Utopia, Jerusalem, but the means toward it. Eden, therefore, can be inferred from the experience of artistic work especially from those moments in which the images are entered in imagination ``here`` and ``now.`` 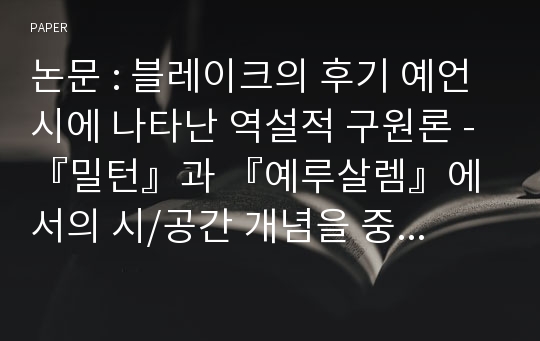