This article aims to demonstrate Lily Bart`s efforts to find her own house, where she can find a "grave and endearing tradition and the real relation to life." Edith Wharton probably was able to more realistically recognize what a house meant to people because she had her own experience of building her mansion, the Mount and publishing The Decoration of Houses. She tries to define the identity of a woman with the concrete metaphor of a domestic house. Lily, standing between a sentimental traditional heroin and a modern independent woman, tries to establish her own identity through the efforts of finding `her own room,` but she fails to achieve independence because she was "raised to be ornamental." Lily moves through different houses in the novel. On one end of the spectrum there is Mrs. Peniston`s house, a home of past, and at the other end, there is Norma Hatch`s showy and trendy hotel. In between these two extremes, there are also the theatrical mansions of the leisure class, the cozy apartment of Lawrence Seldon, as well as the nostalgic romanticized working-class tenement of Nettie Struther. Lily seems to feel most at home in the mansions of her `old set,` but these mansions can never provide the home she eventually comes to yearn for. Lily is incapable of finding a home in any houses she moves in and out of until the end of her life. At the end of the novel, Wharton introduces a house of Nettie Struther, a typist whom Lily once helped, as the idealistic home where Lily finds for the first time `the central truth of existence` in her life. Wharton creates a classic sentimental image of home with Nettie`s. Although this ending has been criticized as too sentimental as well as abrupt, Wharton imagines not a woman being confined at home, but a more egalitarian, companionate marriage within Nettie`s home. This is an ideal, however, that is too far in the future for the homeless Lily Bart. 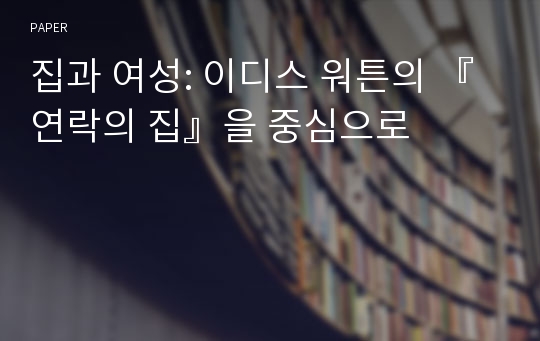