Spirituality has long been misconceived. It was known as "going away" from the earthly and worldly affairs. On the contrary, however, an authentic Christian spirituality is "going into" the midst of life and the mundane world. It is not a "climbing up" a ladder to see God but "climbing down" the ladder to find God within the creation. The Celtic spirituality, proposes the author, is one of this kind of Christian spiritualities that can respond to Lynn White`s thesis in 1967 that "the roots of our [ecological] trouble are so largely religious," by which he meant Christian. The author delves into the roots of Celtic spirituality, which are the pagan mythology of ancient Celtic peoples who were subjugated by Romans. The ancient Celtic mythology, which today gives abundant imaginative power to many fantasy literatures, such as The Harry Potter series by J K. Rolling, was not dualistic, and thus the Celtic people enormously revered the nature, because they could see the supernatural within all the natural around them. Thus God in Celtic spirituality, rooted in this world view, is not the One you could "reach" through your deeds; nor is the Christ in Celtic spirituality the One who brings your individual soul out of this world but the healer of entire creation. In this spirituality, emphasizes the author, we are invited to enjoy koinonia with God in creation, not apart from it, and also with all other forms fellow creature. This Celtic spirituality, argues the author, is one of very promising Christian traditions that which Christian churches must work harder to recover in order for them not to become the part of problem but of solution and a good remedy for God`s creation that is deeply troubled by human beings who are equipped with the technological power to change the nature and agitated by false theologies and world views. 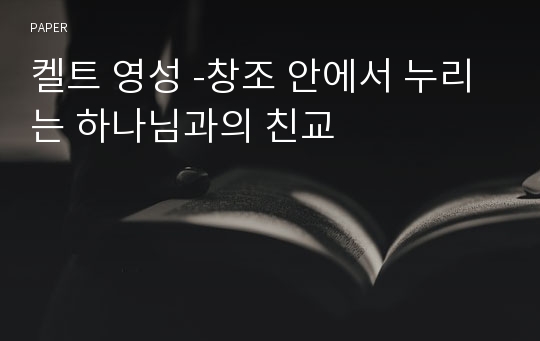