The present article deals with the doctrine of Augustine`s Sacraments. Augustine is often considered as one who have completed the doctrine of sacraments within the Christian Theology. Two contributions are attributed to him, of which one is the inquiry of relationship between `sign` and `reality` and the other an objective evidencing of the efficacy of the sacraments. It follows then that the present article attempts to work on the Augustine`s sacraments also dividing them into two parts: the polemics in Augustine`s symbolism and sacraments. Augustine`s dispute on the issue of sacraments was with Donatists, who viewed the church as a communio sanctorum, i.e., a fellowship of saints. Accordingly, they argued for an extreme stance that a church deprived of holiness is not a church at all. This was a frontal attack against the contemporary catholic church. Thus they did not recognize catholic church as the Church, naturally along with her sacraments. However, the church acknowledged by Augustine was one where both the sinner and righteous were gathered, and he concluded that such does not impair the holiness of the church. He argued that the holiness of the church does not depend on the morality of the saints but on God alone. This argument on the counting of the holiness of the church on God naturally led to an equal application upon the polemics on the efficacy of the sacraments. Augustine viewed that the efficacy of baptism also did not depend on the moral status of either the presider or receiver but only on God. Likewise, he argued that the efficacy of the Eucharist also did not depend on the participants. But he also taught that the unworthy participants are not under grace but wrath. He criticized that the separatists are the ones who are damaging the Eucharist, especially as it relates to the incorporation into the body of Christ. Augustine also argues for the legitimacy of the infant baptism on the basis of Old Testament circumcision. He gives a special attention on the fact that Isaac`s circumcision anteceded his faith growth after his father Abraham`s faith. Through the doctrine of Augustine`s Sacraments, we learn systematically not only about the sacraments but also about what is the Church, how the salvation is realized, who is God and what is to be a human. 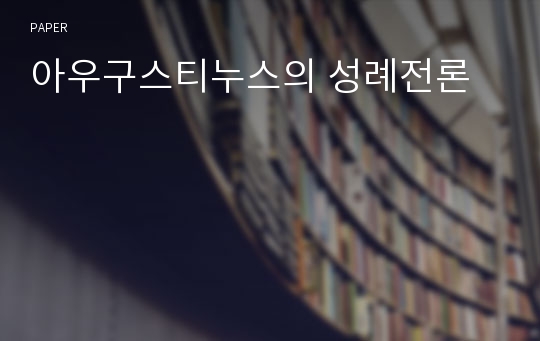