This article illuminates that Hardy has a deep feminist awareness as a meliorist despite his seemingly pessimistic view about women`s fate and feminist movement. Feminist critics argue that a contradiction and inconsistency shown in Hardy`s novels result from his conservative and pessimistic feminist awareness. Hardy, however, believes that women`s tragedy can be averted by overcoming the inner division between their internalized convention and their instinctively perceived views. His deep feminist awareness and his melioristic will are urgently presented in Jude, his most tragic novel, as well as inn Tess. Hardy, however, shows inconsistency in his attitude toward the sexuality of women, which is in contrast with his consistency in criticizing their economic oppression. In Tess, he rarely transcends the conventional sex ideology, which regards women as an inevitable victim and a sexual object of man, even though he challenges the Victorian sex ideology, which denies woman`s sexual desire. He also seems to lack consistency in his characterization of Sue in Jude. On the one hand, her tragic surrender to convention, against her natural instinct, is presented as resulting from her not being able to free herself from the deep-rooted conventional sex ideology. On the other hand, Sue`s tragedy is explained, through Jude, as being the general fale of women who are born to be weak. Hardy`s inconsistency in Jude, however, does not result from his conservatism and his weakened feminist awareness. The tragic ending, Jude`s giving up the will to live because of Sue`s irretrievable reversal, is the paradoxical expression of Hardy`s deep feminist awareness. Hardy`s seeming inconsistency results from his restraint in criticizing the oppression of women. He doesn`t express his viewpomt directly but makes readers feel the implied meaning by juxtaposing conflicting views. 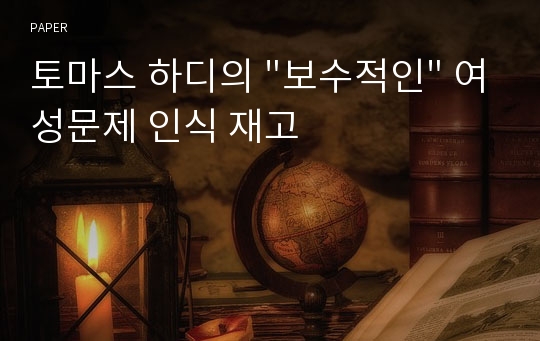