This paper deals with the impossibiltty of mterpreting Jonathan Swift`s A Tale of a Tub as a unified whole, which results m the end in the tragedy of being a reader who is forced into the antagonistic relationship with the author. The expression "tragedy" comes from the observation that in this work the desirable relationship between the author and the reader comes under doubt and is forced into disintegration by the author Swift`s recognition of the reader as a false usurper who presumptuously distorts and disintegrates the text regardless of the existence of the author. This paper attempts to show the impossibtlity of the interpretation of the work in two aspects. First, this paper tries to demonstrate that it is virtually impossible to decipher Swift`s intention m this work because the historical understanding of Swift`s position, which is vital to determine the irony in this work, is hard to obtain. As the background knowledge for determining the relationship between the author and his putattve persona is not available, It comes to be seen that we cannot neither rely on this historical understanding of Swift`s position concerning the contested issues, (such as his attitude towards the orthodoxy of Anglicanism and the fanaticism of Roman Catholicism as well as Puritanism and his attitude towards madness either as a debased mental state or as a sole means of arriving at happiness) nor ignore this kind of basis as its abandonment disables us to discern whether this work is straightforward or ironic. Second, this paper demonstrates that the reader`s independent interpretation of this work is blocked by Swift`s preemptive strike against the reading of this kind. As he ironically invites the reader to participate freely in the creation of the meaning of this work while at the same time making this work fragmentary, Swift can be seen as anticipating that the reader will destroy his work while trying to take over his position as a true creator of meaning and thus can be understood as destroying himself his work as a unified whole to prevent the reader from destroying his work in this way, the reader is discredited as a reliable co-maker of meaning, and then ridiculed, and finally insulted while the whole work functions not as a unified and meaningful unit but as a fragmentary and labyrinthine trap into which every reader including some well-meaning ones fall. Thus defining the word "tragedy" as a sad collapse of mutual respect between the author and the reader, this paper is only disturbing as is A Tale of A Tub, because It raises the question about the status of a reader concerning the creation of the meaning of a work, which cannot possibly be resolved with any satisfaction. 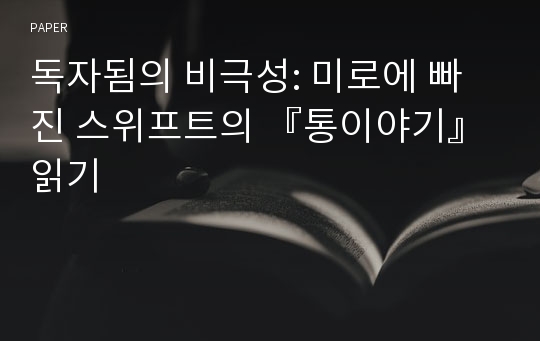