This article aims to examine Mark Twain`s attitude toward his contemporary capitalism in The Gilded Age. Although this work was co-authored with Charles Dudley Warner, it specifically exhibits his ideas and relationship with the Gilded Age capitalism and its various phenomena. The most remarkable aspect of the Gilded Age capitalism is the speculation which pervades all regions and classes of America. All characters in the work are directly and indirectly related to this turbulence of speculation and corruption following it. Twain portrays and satirizes the speculation and corruption of the Gilded Age capitalism in all levels and regions of America in the work. Especially, railroad plays the most important part in the unfolding of speculation. Railroad, on the one hand, symbolizes development and hope to western people, and, on the other hand, brings catastrophes to their fates. In this process capitalism of western regions is also completely dominated by the finance and industry of the East. In the work the politics of Washington is the center of all these speculation and corruption. It is described as the pandemonium of corruption where hypocritical and corrupt politicians and lobbyists such as Senate Dilworthy and Representative Buckstone make conspiracies against one another. New York`s financial and industrial companies bribe them and obtain enormous appropriations from the national treasury. More interesting thing is that although Twain is critical of speculators, capitalists and all corrupt people, he applauds Sellers and agrees to his vitality and energy. It comes from the fact that his vitality and energy represents those of his contemporary capitalism. On the other hand, Twain takes side with him in that he belongs to the middle class or petty bourgeois aspirants in the survival game of the Gilded Age capitalism. This eventually reveals Twain`s class positioning in his contemporary capitalism. 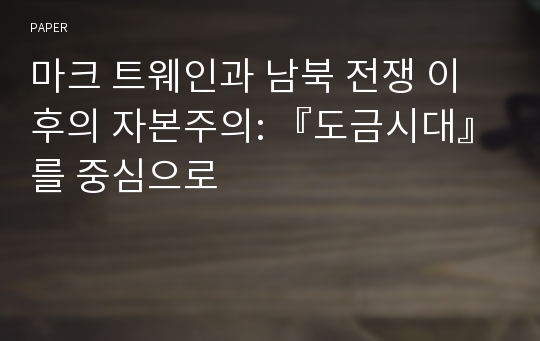