Male Masquerade in Our Mutual Friend

Critical discussions of the masquerade often associate the performance of gender with a lack of social, economic, or political power, ranging from discussions of femininity as masquerade to the cultual history of the masked ball to mimesis in the colonial context. This paper investigates male performance in order to propose that masculinity can also be considered a masquerade and to question the implications for a theory that links the performance of gender to social disempowerment. Charles Dickens`s Our Mutual Friend(1864-65) provides a key example for this discussion, since the novel generally assigns tts male characters the role of performance and its female characters the role of audience In some ways, the male characters, especially John Harmon and Nick Boffin, can be seen as stage-managers controlling the script even as they are performers. But on the other hand, these two figures are both marginalized from their surrounding English society, Boffin as an illiterate servant-turned-wealthy heir, and Harmon as an English blank slate returning from fourteen years abroad. This paper demonstrates that performance can be at once an empowering means and a disempowered requirement in Our Mutual Friend, and illmninates the limitations and possibilities of the male masquerade. 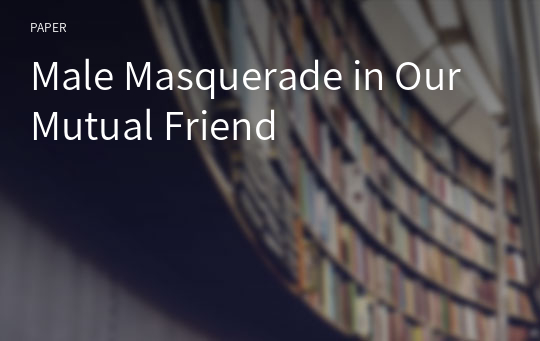