Henry James was one of the first writers who practiced authorship as a profession. Throughout his career as a professional writer, he received ongoing recognition from editors in both England and America for his literary achievements. He is also believed to have secured financial stability thanks to an enormous inheritance from his rich father. Despite this seeming stability in his social and financial status, however, James, who decided to live by his pen, was haunted by a tenacious pressure from `the money question` engendered by his precarious literary income. At the same time, he was anxious not to sacrifice the aesthetic standards of his literary practice to satisfy the demands of the marketplace. He was struggling to keep an interior balance between those two incompatible desire.s In this sense, his literary career was like walking a tightrope. This double anxiety over art and money which James had to cope with has much to do with the concept of professionalism emerging in the mid-nineteenth century. Professionals such as doctors, lawyers, teachers, bankers, and literary writers attempted to make a kind of self-authentication through their professional knowledge and practice. Because they claimed spiritual values like aesthetic creation or public service in their vocational activities, they tended to suppress or disguise their desire for the material values represented by money. We can find an ample trace of the inner discord between the alleged and the suppressed pursuit of such professionals reflected not only in James`s biography but also in his fictional works, such as Washington Square, The Bostonians, The Princess Casamassima, and "The Next Time". 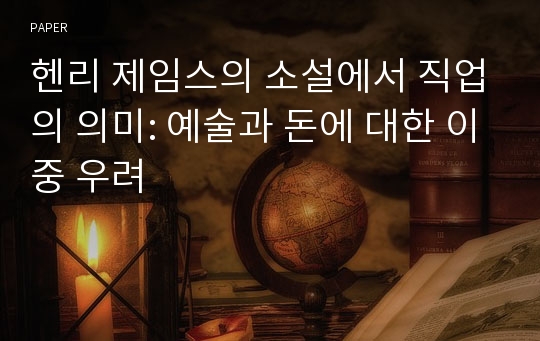