Acclaiming Thoreau`s ecological view of nature reflected in his Walden, ecocriticism pours biting denunciation on any sign of anthropocentric thoughts in it. Eco-critical scholars also cast a severely pessimistic glance at the values of civilization and technology on which Thoreau speculates in Walden. This unilateral attack on the self-centered perspective of man and his intellectual achievement does not properly evaluate the multifaceted, complicated, and sometimes even self-contradictory thoughts on the relationship between man and nature which Thoreau elaborates in Walden. This paper interprets Thoreau`s view of civilization, and of nature, its progenitor, with a view to authenticating his belief that the two environmental axises for human survival can, and must, coexist with each other. In Thoreau`s idea, ecocentrism and anthropocentrism are not necessarily in internecine relationship with each other. The one works on the basis of axiological postulation, while the other on the level of epistemological explication. In Walden, Thoreau painstakingly accounts for the unique ontological condition of human beings in natural environment, that is, the fact that human species, unlike all the other species, cannot but adapt nature so as to survive and prosper. Generating civilization is considered not as an option but as a fate for human beings. Thoreau intentionally tried to retreat his experimental life in the forest of Concord back to the state of the diverging point at which civilization had emerged from wild nature. Through practicing life of rigorous simplicity, he surely tried to understand empirically the fundamental relationship between man and nature and to learn how civilization can consist with wild nature. He tried to define the practical boundary and degree of the "gross necessaries of life" through his half-civilized life. Thoreau points out the fact that human nature got degraded from the healthy simplicity of primitive wildness to the sick slavery of materialistic desire in modern civilization. Moreover, he demands that we recuperate the health of our human nature by maximizing the accommodation of wild nature in our life, that is, by adapting it to the minimum degree. Finally, he envisions a harmonious symbiosis of civilization and nature which is to be fulfilled by fully cultivating the spirituality of our human nature. 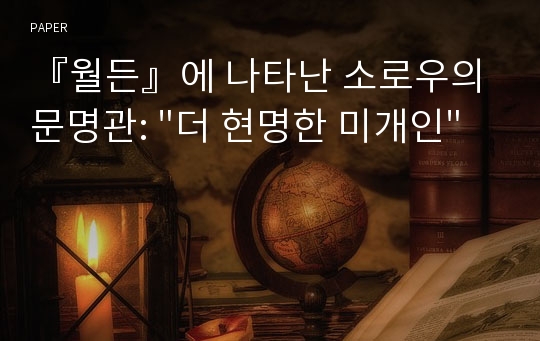