The purpose of this paper is to investigate the opacity of front vowel raising in central and western part of a C∂nnam Dialect circle (CD, henceforth). Opacity, which refers to the phenomenon that output forms are shaped by generalizations that are not surface-true, or not surface-apparent, has been a challenge to classic Optimality Theory (OT, henceforth; Prince & Smolensky 1993) since it does not allow intermediate level of derivation. Local Conjunction (LC, henceforth; Smolensky 1993, 1995, 1997) and Sympathy Theory (ST, henceforth; McCarthy 1999, 2002) have been proposed to deal with opacity but there are also problems in them. In this paper to resolve the problem in OT, LC, and ST, we will attempt to solve the opacity problem by employing the new account of recently proposed Optimality Theory with Candidate Chains (OT-CC, henceforth; McCarthy 2006a, 2006b), which incorporates inter-candidate derivational information with PREC(edence) constraints(A, B) (PREC(A, B), henceforth). Based on OT-CC with Prec(A, B), this paper examines and analyses the opacity of front vowel raising, in which rule order produces a kind of underapplication resulting from counterfeeding rules and supports the superiority of OT-CC. 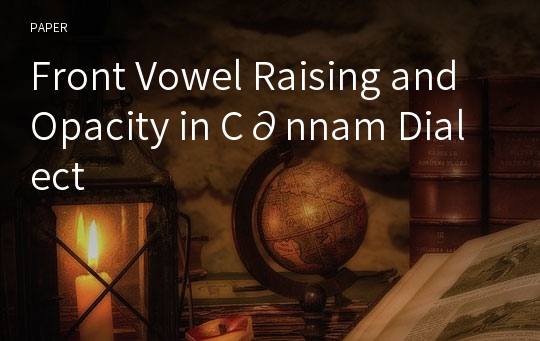