Early critical response to Flannery O`Connor`s fiction mainly centered around the author`s characteristics as a Southern writer and her treatment of religious themes based on her Catholicism set in the Protestant South. With the rise of feminist and gender criticism, a number of recent critics such as Richard Giannone, Marshall Bruce Gentry, Sarah Gordon, and Katherine Hemple Prown focus their attention on feminist issues and gender question in O`Connor`s fiction. Her works predate the upheaval of 20th-century feminist movement. In her letters, she disavows her involvement in the feminist question. And yet, a feminist reading of her works sheds an interesting light on the appreciation of her unique achievement. This paper aims at exploring some of O`Connor`s short storioc in the light of gender consciousness and highlighting the unique characteristics of her fiction in this connection. "A Temple of the Holy Ghost" provides an interesting entry point to the gender question, as the protagonist combines a shrewd perception of a precocious child with Catholic sacramental vision, while striving to cope with her sense of identity as a preteen girl. "A Good Man Is Hard to Find" focuses on the clash between a self-complacent old lady and a male serial killer who brings about last-minute change of heart of the former through the harsh means of shooting her to death. "A View of the Woods" deals with a fatal clash between a hard-hearted grandfather and his nine-year-old granddaughter who opposes him for his selfish materialism and blindness to the human values of the woods. "Good Country People" presents an arrogant atheist female philosopher who is upended by a diabolic secularist man who sells the Bible. Finally, "Revelation" presents a conversion experience of a hypocritical middle-aged woman brought about through the challenge of a crazy girl who sees through her. All these stories deal with violent clashes between characters of difference sexes, generations, as well as those of same sex. What preoccupies O`Connor`s attention in her fiction is the need for conversion and transformation in human beings regardless of gender and generational difference. The stature of female characters in O`Connor`s fiction makes a firm statement as to the equality of both sexes in the transcendental dimension. 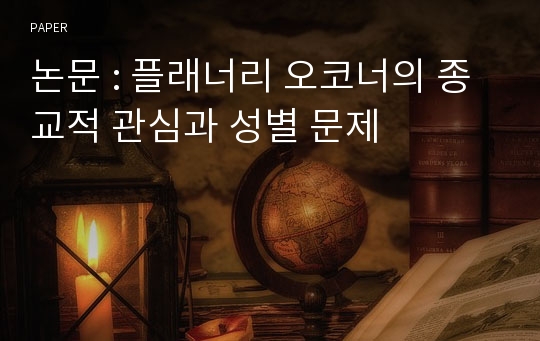