Henry James`s realistic novels in the 1880s, which focus mainly on the social tumults of conflicting desires between sexes and classes, have incurred many a contradictory critical response. Some have blamed him to be too conservative for the reality; others praised him to be true to real lives or even radical. This essay argues that such opposite critical responses were directly due to James`s dialogic sense of history and society; he presents the novel as a dialogic space of subject and the other, that is, as a meeting place for dialogue. In such realistic novels as The Bostonians, The Princess Casamassima, and The Tragic Muse, James presents the egocentric and monologic characters who will deny and abolish the other values or the established institutions to reconstruct another exclusively upon their own views of world and society, without regard to other voices or positions. Sometimes they use others for their purpose. For example, Olive Chancellor and Paul Muniment seek to provide a new living ground for, respectively, women and workers while excluding the other sex and the upper class in that society. Peter Sherringham is a modern man of reason and calculation; he seems to believe everything and everyone can be classified into the utilitarian category; he does not conceal his arrogance to use the beauty and skill of an actress named Miriam Rooth as a tool to win his diplomatic games. They regard this world is made up of one color, rather one voice of their own, monolithic, monologic; they neither doubt their point of views, nor listen other voices. James, in his later psychological novels, presents the honest and modest characters who see their worlds connected with other ones and try to listen carefully other voices. Maisie in What Maisie Knew or Maggie Verver in The Golden Bowl, for example, seems to see the otherness of the other, the needs of a ceaseless dialogue between them, or the presence of other voices in their world. 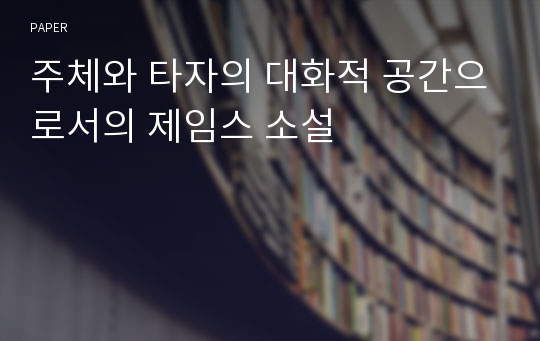