In terms of subject and its development, "Encounter," one story out of Joyce`s Dubliners, can be compared with Wordsworth`s "Resolution and Independence." Both, despite their different genres, tell the narrator`s encounter of a strange old man in the wilderness, which leads to awake the narrator to the reality of life. Although the awakening in the wilderness represents their identical desires to overturn the Ancient Regime of social discrimination, they have as different ways to seek its fulfillment as they belong to the different times. While Wordsworth is proposed to believe that esemplastic imagination will help the narrator to reach fulfillment, i.e. resolution and independence, Joyce is to suggest that the narrator can try only to reveal the melancholy of the fulfillment because he thinks people in the modern world are besieged by paralysis. It follows that Joyce seems to be more realistic than Wordsworth, who describes the fulfillment as taking place in the natural world outside human society. It is likely that Joyce intends to parodize the scheme when he represents the narrator under the guise of a similar configuration to that of Wordsworth`s. Wordsworth is, however, not escapist but rather looks into society through imagination. When he believes that society can be integrated through the transference of nature`s esemplastic power, he is supposed to idealize the world and resist history. All the same, he does not hold on to the idealistic pose and he has the narrator prepare to return to society with resolution and independence. It proves his own form of realism. Therefore, what they both want to show through the encounter is their own realistic methods to awake to the reality of their contemporaries` lives, whether one tries to hold to the aspiration of integrating society, or the other to presume the dark shade of aspiration. 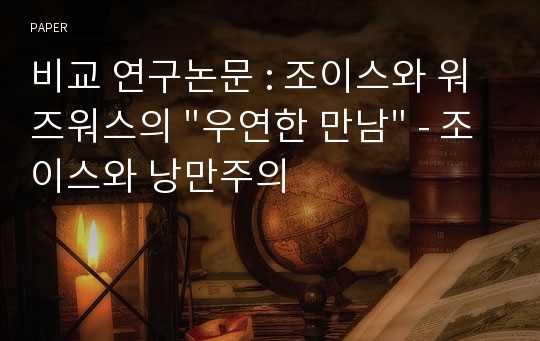