The present study aimed to investigate the impact of a short-term exercise training (ET) on the cardiorespiratory fitness and autonomic modulation of women with breast cancer who were receiving adjuvant radiotherapy, chemotherapy or hormonotherapy. Eighteen women previously diagnosed with breast cancer receiving adjuvant radiotherapy, chemotherapy or hormone therapy were randomly allocated into breast cancer nonexercise (BC) and exercise groups (BC+Ex). Moreover, nine healthy physically inactive volunteers were recruited to compose the noncancer control group (CG). The BC+Ex group was underwent to a combined ET program, which was based on resistance, aerobic and flexibility exercises. ET was performed 3 times a week, on nonconsecutive days, for 4 weeks at the hospital room under the professional supervision. In turn, BC and CG remained without be engaged in physical exercise programs. Volunteers were evaluated regarding their cardiorespiratory fitness and autonomic modulation (i.e., time, frequency domains, and nonlinear [symbolic analysis]) before and after the end of the ET program. A priori, data indicate that women patients with breast cancer showed impaired exercise tolerance, as well as autonomic dysfunction in comparison with age-matched healthy control subjects. However, a 1-month combined ET program could reverse such impairments, so that after the intervention, BC+Ex and CG showing similar results in the cardiorespiratory test and heart rate variability analysis. In conclusion, data of the current study indicate that 1 month of ET is able to reverse impaired cardiorespiratory fitness and autonomic modulation in women with breast cancer receiving adjuvant therapy. 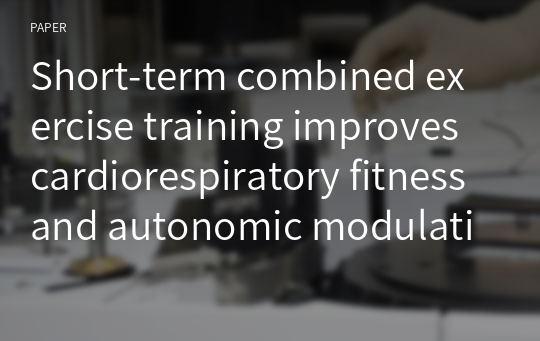