The Impact of Different Taxing and Spending Institutions on the State Economy: Fiscal Federalism and Foreign Manufacturing Investment in the American States

Many state policymakers and administrators have directed efforts to increase foreign manufacturing investment (FMI) due to its potential effects to raise the employment rate, technological progress, and productivity improvements in regions. State governments have implemented exceptional tax policies and fiscal incentives to attract more FMI. Unlike the expectation of state policymakers, however, the existing studies in FMI identify that the effects of such direct benefits were not appeared equal even among states that have the same or similar investment environments with their competing states. Survey results responded by multinational enterprise managers also present that such direct tax and expenditures benefits are not major consideration of investment decision. This study suggests that different institutional design and regulations that play roles in state taxing and spending decision-making make any difference in FMI into American states. Accordingly, examining the direct impact of fiscal incentives do not help our understanding of FMI because unique state fiscal institutions and regulations would limit the degree to policy manipulation before policymakers can do so. This research empirically assesses the relationship between fiscal federalism and FMI by focusing on the level of fiscal decentralization, federal grants, and fiscally constraining institutions. Testing FMI data that covers the 50 American states by source country between 1987 and 2006, this study finds that potential manufacturing firms are very responsive to fiscal federalism and keep investing in states where exercise high levels of fiscal institutions and constraints. 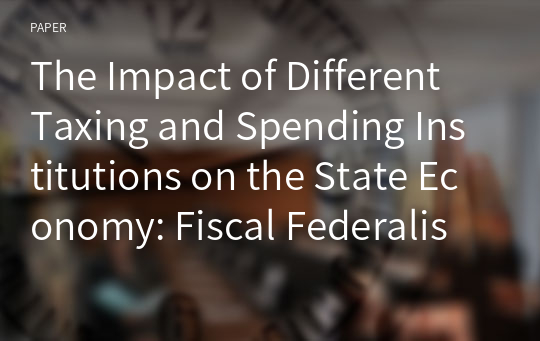