This paper aims to examine the aesthetics of acceptance in Hemingway’s earlier works. Participating in the war as young persons, earlier protagonists experience the horrendous calamity there. They are faced with death or wounded in the battle field, and feel the afraid of death. After their back-to-society, they suffer from aftereffects caused by war. Krebs in “Soldier’s Home” falls in helplessness and Nick Adams in Hemingway’s earlier short stories has a hard time with shell shock such as insomnia. The consequence is that they got lost in the world of nihilism. Nevertheless, they read books, go fishing and watch the bull-fighting to treat sleeplessness and purify their body and mind, rather than remain in the social mood of nihilism. Especially, Jake in The Sun Also Rises can dignify himself by the manner in which he accepts the inescapable catastrophe. Jake’s graceful acceptance flourishes in protagonists of Hemingway’s later novels who devote themselves to actualizing justice. As a result, this study shows that Hemingway’s earlier works reveal the aesthetic of acceptance, getting over nihilism which was widespread in 1920’s after World War I. 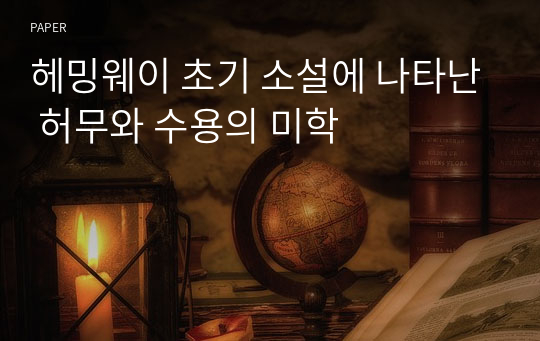