This study aims to investigate students’ satisfaction level and to explore students’ academic achievement on ability grouping based intensive TOEIC program. To achieve the first goal of the research, 56 students were divided into three groups (the beginning, the intermediate, and the advanced group) based on their mock-TOEIC test scores. A questionnaire was administrated to them at the last week of a 8-week period. This study revealed that the overall satisfaction level of all three groups was significantly high and that the order of the satisfaction level among the groups was the beginning, the advanced, and the intermediate group. For the second goal of the research, all 8 mock-TOEIC tests were administrated to 45 students over a 8-week period, and among them, 4 mock-TOEIC test scores were analyzed. This study also indicated that overall, all three groups showed a remarkably high academic achievement on the program and that the ranking of the academic achievement among the groups was the intermediate, the beginning, and the advanced group, which was slightly different from that of the satisfaction level. The results of this study suggested that ability grouping based intensive TOEIC program greatly contributed to the sharp improvement of students’ overall TOEIC test scores. 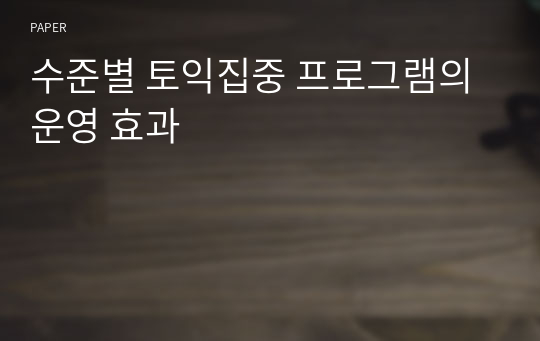