The story idiom of Zengzi slaughters the pig has a lesson: “Parents should be exemplary to their children and should always be trusted by their children.” But this idiom and the story behind it have some problems in its details, regardless of this great lesson. These problems can be largely divided into the problem of the development of events and the problem of assertive thought.“An honest father corrects his careless wife’s lies and keeps his(their) promise with his innocent son.” is the original plot of the story, This plot has a rich literary quality because it has many careful transitions and the characters’s behaviors are symolic. But the problem with the story, which is more difficult than the lack of probability, is that its content does not conform to the rational reason of modern society. The father’s behavior is overly patriarchal, the mother’s behavior is excessively careless, and the child’s shape is too animal. Therefore, we wonder if this idiom is suitable for the liberal arts education of college students.The main character of this story, Zengzi, is famous as a disciple of Confucius and was an important scholar of ancient Chinese Confusianism thought. In this story, such Zengzi absurdly asserts and teaches the Legalism thought. Zengzi acted on the principle of Awards and punishments rigorously carried out and taught how to be truste by others, which meant the art of living. He was indifferent to the relationship between keeping one’s word and cultivating one’s personality and ideally enhancing one’s life and learning attitude. This has overshadowed the existing common sense that Zengzi was represented in Chinese history by his moral self dicipline via integrity and trust.With regard to these issues, this paper notes the fact that the origin of this story idiom was Hanfeizi. Although there is no specific literal evidence, It is highly likely that Hanfezi modified the existing story or created a new story to use it as a basis for his Legalistic argument. As a result, this paper assumes that the story idiom of Zengzi slaughters the pig in which Zengzi’s words and actions were falsified or distorted had appeared. 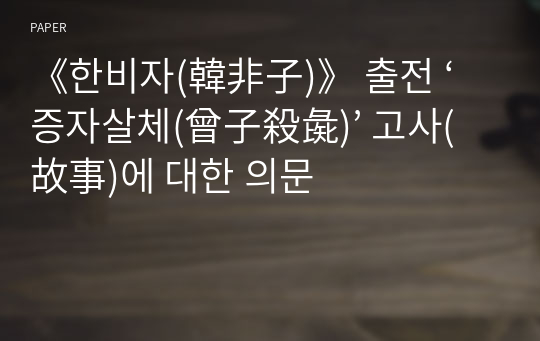