The study aims to analyze the visual recordings that capture social images of the North and South Korea during the liberation and the Korean war, produced by non-Korean nationals. The article also critically restructures the Koreans daily lives by the mode of representation created by foreign film producers through the camera lenses. Moving images from visual media, such as movies, photos, and video recordings, can be important historical texts in addition to the official and unofficial documents. Those images should be considered as important historical materials as a “visual paper.” The study seeks to expand the scope of historical research by using the video records produced by the U.S. military as the key material.The subject of analysis is video records, which include produced newsreels, video clips and captured visual footage during the war by the U.S. military. Most visual clips about the Korean war in Europe, including Britain and France, were originated from the U.S.’s, which resulted in a considerable number of overlaps between two continents. In contrast to theatrical movies, video records are produced from live-actions of the unfabricated reality. Video Records are based on historical fact. Newsreels, one of the most important forms in this genre, are often referred to as “news movie”, which include a famous South Korean Taehannyusŭ(Korean News).Video Records are made with specific purposes. Capturing the U.S. the Soviet Union, North, and South Korean politicians and ordinary people during the liberation and the Korean War, the films in this article shows intersecting emotions such as desire, joy, pain, and despair. The study aims to analyze the system of reproduction of such clips filmed the eight years after the liberation. In particular, by rearranging the fragments in different video clips that capture daily life, this study tries to delineate a vivid illustration of ordinary days during the liberation and the war.Visual recordings can offer a wide range of socio-cultural information on the modern history of Korea. Researches on video records will not only deepen the study of political/economic history. It also allows us to observe the cultural history, including, in this case, the emergence of various subjectivities during this historic moment and their new experiences. This is why research of video records should be more encouraged in the field of historical studies. 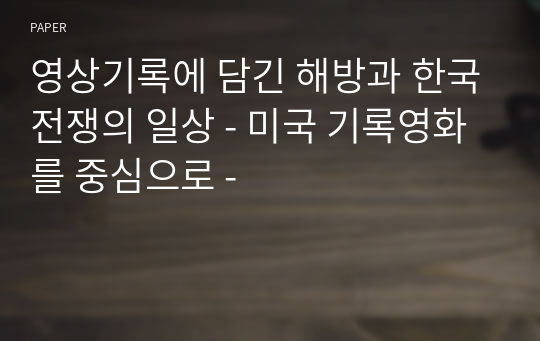