The aim of this thesis is to study Thomas Hardy's Tragic Sense in the center of The Return of The Native. Hardy's tragic vision of life is an essential part of his artistic works not only as a philosophical theory but also as a means of achieving his art.In Hardy's literary world, man is of the smallest importance. His characters are at the mercy of some other unavoidable power than man's own will. Man's struggle is not chiefly with his fellows, and the perversity of his lot is not generally of his own making.Hardy's novels are related to each other by his view of point of fatalism. Hardy's personal creed seems to be in harmony with the mood of the nineteenth century. The influence of Schopenhauer, with his presentation of life as the result of "a blind will to live" manifesting itself ruthlessly in defiance of man's conscious reason, counts for much in determining pessimistic spirit of those days.The Return of the Native can he said as a whole to be a continuous record of Eustacia's vain attempt to escape from the limitations of Edgon Heath through the means of love, and that struggle is the key to all her tug-of war with Wildeve and Clym. The novel ends with three deaths. In this novel, there is something powerful that controls man's destiny. In this respect, Heartless circumstances have placed Eustacia Vye in a situation in which her gifts are a plague rather than a blessing. Natural law leads man from one mistake to another.Hardy tries to present the eternal reality of Nature. In The Return of the Native, Egdon Heath plays a part as a character, not only a setting. Hardy manifests that nothing in man is significant except race, sex, and the great servitude to time and nature. Hardy believes that nature is alive beyond our ordinary knowledge, and he wants to present one distinctive impression. Edgon Heath's dreary and sterile waste seems to symbolize the indifference with which nature views the pathetic fate of human beings. From this crude earth, Eustacia, Wildeve, Mrs. Yeobright, Clym, and all the rustics are born. Three of them die here and are taken back into the Heath.In The Return of the Native, there are two major characters whose desires and aims differ from each other. Eustacia always wants to leave the Edgon Heath that she dislikes so much, and she thinks that life in Paris will be happy. Eustacia's longing for spiritual expansion leads her to play with the love of Wildeve, and for this reason, she later throws him over when she finds the greater promise in Clym, who comes back from the Paris to which she aspires. Thus Eustacia and Clym love each other and marry with different purposes. Clym's intention to correct the world's ills is too ideal when the Heath people's goals are considered. And Clym fails to understand that his pursuit of private happiness with Eustacia goes against his self-conceived social role. In the result, Eustacia's endless loinging leads her back again to Wildeve, and at last, when she loses all hope, she dies, complaining of her helpless fate.Man has a strong relation with nature in his destined fate. Hardy believes that man is part of nature. He doesn't think that a man can avoid the environment.Hardy's fatalism can be seen in The Return of the Native. Man's life is controlled by various agents of fate. Man's will is helpless before the agents of fate when his will rises against a certain Great Will that controls man's fate. Hardy calls this will 'Immanent Will' in his long epic, The Dynasts.In The Return of the Native, although Eustacia made efforts to escape from the Heath, she is helpless before the Immanent Will that controls man's fate. Eustacia's efforts result in her own death, and Clym's efforts bring disaster instead of realizing his ideal. Irrespective of man's will, all the human affairs are destined by the Immanent Will. 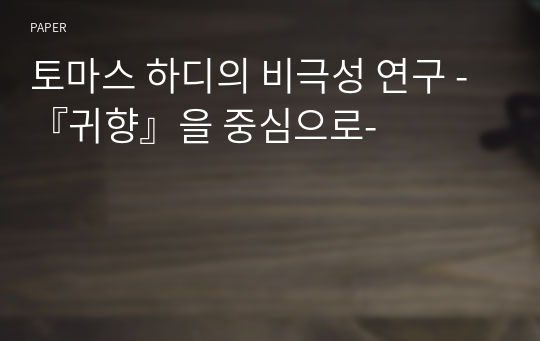