Since the publication in 1905, Edith Wharton's The House of Mirth has attracted diverse readings from many critics. The dominant trend of the interpretations, however, is to emphasize the stark determinism of the text extended to literary naturalism. According to the trend, the protagonist Lily cannot devise an alternative against a naturalistic world in which she eventually becomes a totally determined product of social and economic environment. In other words, incarcerated in the social network of power structures, Lily does not produce any convincing possibility of resistance that might change the structures. It is true that the socioeconomic base and the patriarchal culture are dominant in the text, but the deterministic readings cannot do justice to the multiplicity of the text. Here lies the prime purpose of this paper: how can we salvage the seed of resistance against the power structures? For this purpose this paper makes use of Bakhtin's theory of monologism and dialogism. As well known, while monologism unifies all ideas and voices into a static and objective oneness, dialogism allows a multiple interaction between the characters and points of view so as to show contradiction-ridden and tension-filled reality that denies the domination of an authoritative center. This paradigm of monologism and dialogism gives us a useful vocabulary for and a new way of thinking about the text. When we use this paradigm, Lily's final death can be interpreted as an attempt to overcome the merciless logic of society that discards the rebellious spirit into a dustbin. Lily's ambivalent confrontation with the dominant ideologies of America at the turn of the century suggests both an act of subversion and an effort at appropriation and redefinition of them. The ambiguity of the ending revitalizes the seemingly one-dimensional world of the naturalistic novel with its tension-revealing inconclusiveness that invites the reader's volutary participation in the ongoing praxis for a better society.< Sookmyung Women’s University > 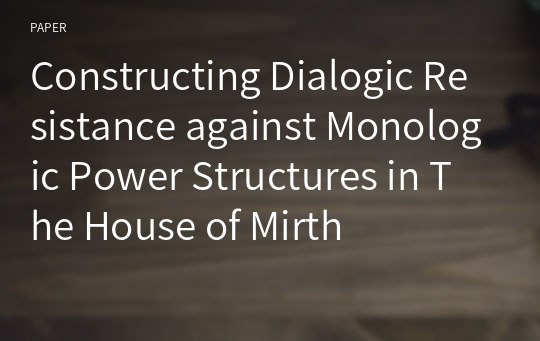