This purpose of this study is to analyze Hemingway’s famous Iceberg Theory and its effect, silent language. The definition of the Iceberg Theory is as follows; one eighth of the iceberg is above water and seven eighths of it are under water. Like this iceberg principle, the writer should omit and eliminate the many unnecessary parts and details. Also the writer should select the sin qua non and the basic words to strengthen the expressed one eighth part of the iceberg. The creation of Hemingway’s Iceberg Theory was influenced by Paul Cézanne’s basic geometric patterns: the cylinder, the cone, and the sphere. One aspect of writing using the Iceberg Theory is the technique of omission and simplicity. However, the simplicity is deceptive, so in Hemingway’s style of deceptive simplicity, “the essence of what is said often lies in what is suggested or left unsaid.” The effective use of this technique is a further testimony to the rigidity of Hemingway’s style as much as to its potential power. He also developed a highly selective use of image words in a way that, by repeating them, hidden meanings are implied or silent rather than stated. By this principle we see “the irony of the unsaid,” silent language, space language, unsaid sayings, objective correlative symbolism, and image words in Hemingway’s novels. 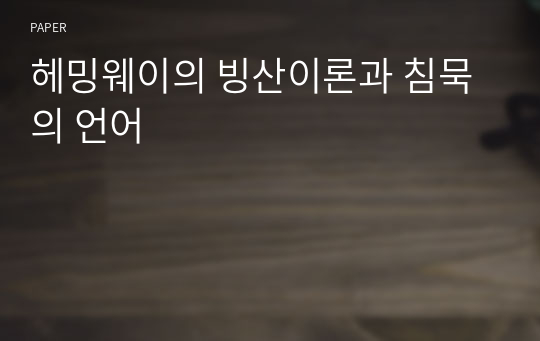