The purpose of this paper is to examine aspects of Ngugi wa Thiong’o’s adoption of Kim Jiha’s writing strategies. It is clear that critics of literature have dealt with the influence of one writer upon other writers for a long time. It was Harold Bloom who said the phrase, the anxiety of influence, to identify his view that “influence consists in a direct ‘borrowing,’ or ‘assimilation’ of the works of the predecessors.” In the 1970s, Kim Jiha was well known for his works and some of them were translated into several languages. When Ngugi read Kim Jiha’s works, Ngugi saw “how effectively he had exploited the oral forms and images to confront the South Korean neo-colonial realities.” He adopted Kim Jiha’s features into his works, so it is not difficult to find them in his works. This influence, between Kim Jiha and Ngugi, is not properly defined by the word anxiety. Rather Ngugi enjoyed it, therefore, we can call this the enjoyment of the influence. (Wonkwang University) 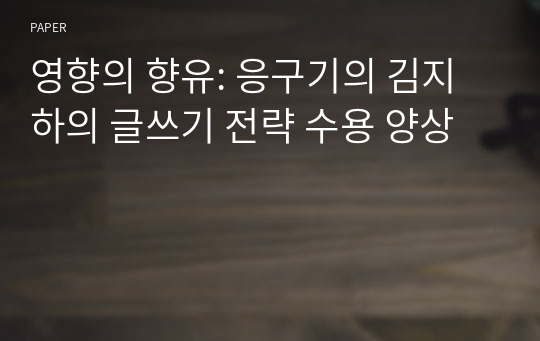