The objective of research is to study the view of family in Miyazaki Hayao's “My Neighbour TOTORO”. This movie has been released in 1988, when the destruction of nature and the personalization of families progressed at the forerunner of the bubble economy. And it's based on the rural landscape of Japan in 1955, when rapid economic growth and nuclear family became a part of Japan.Satsuki, the main character, had to act as her mother at the age of 10 because her mother was hospitalized for spinal caries. Satsuki, who was only a good child as an adult child, was converted when his sister Mei got lost. She reached her limit, cried loudly in front of Kanta's grandmother living in the next house, and asked the ghost Totoro for help.As a result of the research, the theme of this movie was “to be a child”. It means to be a child who recognizes and expresses his feelings and ideas as it is. Sometimes they need the courage to take to someone into their confidence and ask for help. In order to present such a message, Miyazaki removed her mother from Satsuki's family who could suppress childhood and impose adult common sense. In order to satisfy Satsuki's feeling without her mother, Kanta and her grandmother in the next house and Totoro, a symbol of motherhood in nature, were placed near her. Here, it was considered that a view of de-family based on pseudo-family and motherhood of nature appeared. 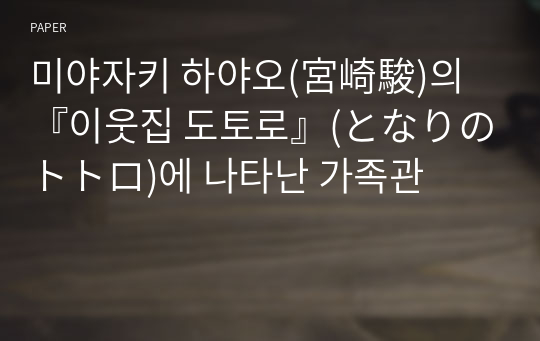