This article clarifies what kind of legitimation strategies are used by Japanese and Korean people in YouTube comments regarding the #MeToo movement and gender awareness in Japan and Korea. Legitimation is based on several constructs: authorization, emotion, evaluation, speculation and estimation, quotation, definition, classification, comparison, and cooperation. This study reveals that evaluation, quotation, and classification strategies were used the most in both countries. However, several discrepancies were found in the results. First, in the case of evaluation, Japanese people tended to use only negative expressions, whereas Korean people tended to use both positive and negative ones. Moreover, in the case of quotation, Japanese people mostly referred to events relayed by the media, whereas Korean people also shared their own experiences. Interestingly, in the case of classification, Japanese people drew a clear distinction between a younger and an older generation, assessing the latter one negatively. Also, Japanese people’s lack of awareness about social issues was emphasized when compared to North American people. In opposition, Korean people distinguished victims from assailants, and victims expressed empathy by telling their own stories and regarding them as inner and outer. Lastly, Korean people were more prone to express their emotions compared to Japanese people. In conclusion, many negative aspects of the #MeToo movement were mentioned by Japanese people, however, there were not only negative one but also positive one which Korean people told their own experiences and show empathy despite the rate of using strategies was almost close. The reason of the result can be the huge influence of Japanese and Korean history, culture, and media. 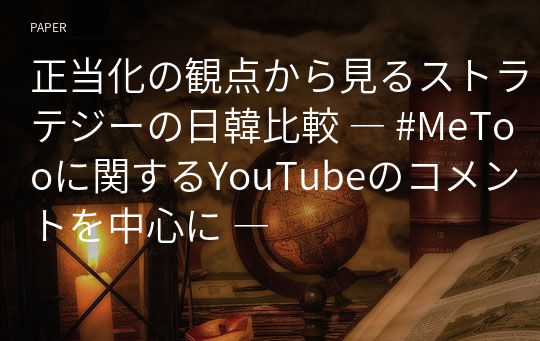