The present study focused on how winter's natural material snow appeared in Haiku, a traditional Japanese poem, focusing on the works of Matsuo Basho (1644-1694) by Shohu Haikai(like Basho’s Haiku)Completion.To this end, we looked at how winter snow appeared in Waka, where the flavor was to focus on various feelings about snow, especially those of human history. In the Haiku of Basho, the scenery of Snow was able to identify that the nature of winter was more central than the human mind. The scenes of various snow scenes were depicted through Haiku’s techniques, scenes drawn with images of one’s own mind, expressions of various colors contrasting with white snow, and the flavor of the snow through a Japanese custom, Yukimi(snow viewing). After all, the flavor of the snow painted on the Basho Haiku symbolized the Basho’s own image of nature by painting the landscape in various colors instead of focusing only on depicting the natural nature of the season.In other words, the figure of Snow drawn in the Haiku of Basho is more about nature of the season than about the center of mind, but it is not only about describing the nature as it is, but it is symbolically represented by its internal reflection on nature in various snow landscapes. 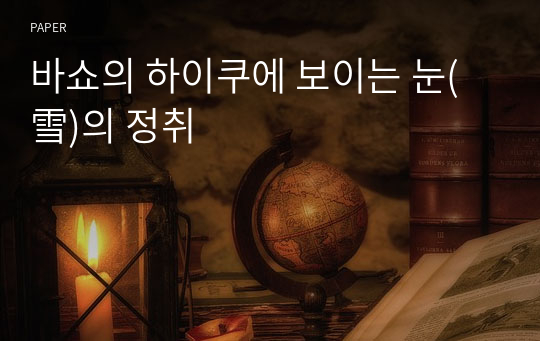