In most languages, the expressions for smells also can refer to possibility. In Japanese, this tendency has been stronger than Korean, and it grows much more these days. Today the adjective “kusai” seems to cover the meanings of “-poi” and “-rashii” as a suffix. Recent studies suggest their commonalities. It has expanded not only meaning but also the usages in Japanese, though this tendency doesn’t exist in Korean. This paper aims to make clear this tendency and utilize it to compare Korean and Japanese in the near future.This paper views the usages of “-kusai” with nouns of human groups (“ninngen”, < sex >“otoko / onna”, < age >“toshiyori / otona / kodomo” and < self >“jibun / tanin”) as a suffix on Twitter, novels and news articles. Japanese “-kusai” seems to be losing the negative connotation that has been mentioned. It tends to point some characteristics of a particular target, like in common novels and anime. With “ninngen”, “-kusai” points a positive evaluation rather than a negative evaluation now, and it shares the meaning that “-rashii” had had. With < sex > nouns, “otoko” is used freely though “onnna” with negative connotation is used. With < age > nouns, only “kodomo” is used mainly in the “reply” on Twitter. With < self > nouns, “jibun” is used less than “tanin”, and it seems to share the meaning of “mizukusai”. In the Japanese language, the expressions of smell refer to not only smell but also to the atmosphere of the target.In Japanese, the expression of smell “-kusai” has a much wider meaning than ever and it will grow. The results suggest Japanese characteristic systems for expressions of smells. 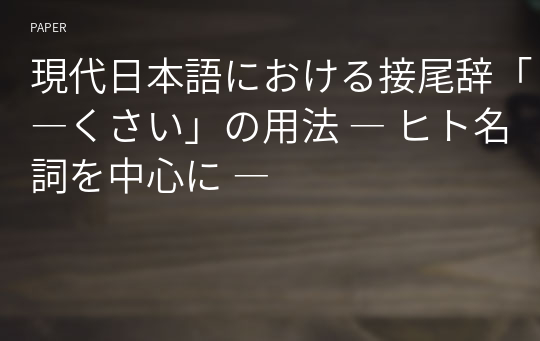