Shakespeare’s play often contain contempt for the common men or working class. It is expressed mostly by the proud noble characters who are very critical of them. Generations of critics have maintained that Shakespeare shared this anti-populist sentiment with his social betters. For instance, they equated the nobles’ contempt for common men in 2 Henry VI and Julius Caesar with Shakespeare’s own contempt for the working class. However, as a yeoman, Shakespeare shows sympathy for the lower class people in Henry V, in which he portrays them as victims. Yeoman soldiers the disguised king encounters in the play reveal discontents with the king and his war. In Coriolanus, rebellious citizens express a strong desire to participate in politics. Tribunes are appointed to placate their demand for their voices in politics. The problem, however, is that tribunes do not represent well but serve their own purposes. The play reflects Shakespeare’s belief in the possibilities of the common men in representative politics, although he also shows that republicanism has limitations because of the abuse of the representation. (Chungbuk National University) 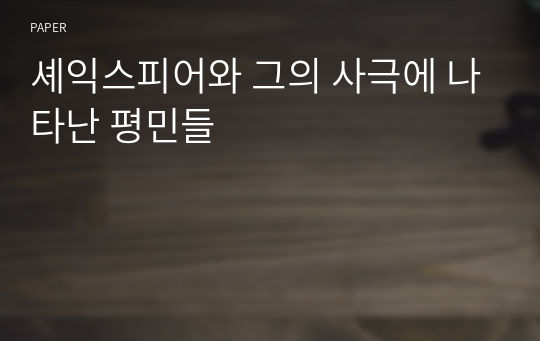